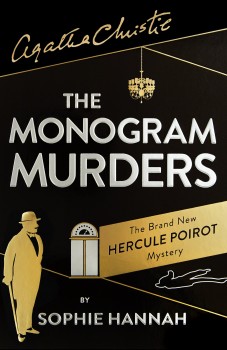 Hercule Poirot is sitting in a coffee house in London when in flies a young woman in a state of panic. Later three bodies are discovered in a local hotel, each carefully laid out in a particular way. Are the two incidents linked? Poirot and sidekick Catchpole from Scotland Yard investigate.

Hercule Poirot is sitting in a cafe in London, enjoying a peaceful cup of coffee when in flies a young woman, evidently in a state of panic, fearful of being pursued. Poirot introduces himself and explains his role helping Catchpole of Scotland Yard, but the young woman appears too frightened to talk. Subsequently Catchpole arrives, having attended the scene of three murders at a hotel, each victim laid out in the same way with a signet ring placed in their mouth. When it emerges that the victims all come from the same village, Poirot sends Catchpole to investigate.

This certainly feels like an original Poirot story, at least like the ones shown on television. Poirot has the same characteristics and the image of the man that is conjured up is the same. If the author’s name were not on the front of the book it would be difficult not to think of it as an original – which presumably is the intention.

However, anyone who has read the novels of Sophie Hannah will recognise the tortuous way in which the characters unravel the mystery. The final chapters become more and more intricate and there is a very clever play between all the characters regarding who knows what, what is fact and what is not, until eventually all the culprits are exposed.

Many of the characters are drawn in depth, for example the two waiters who help the investigation. Poirot can accurately predict what they would have done based on what he has seen of them in other contexts. This ability to understand the minds of people seems to be a characteristic of Poirot, whereas Catchpole, the Scotland Yard detective, is portrayed as a bit of an idiot who is only interested in factual evidence. Poirot constantly criticises Catchpole for not thinking hard enough. Indeed, Catchpole is portrayed as a rather pathetic figure at times, mainly existing as a device to enable various theories to be discussed. Having read none of the originals it is difficult to know whether or not Catchpole was one of the original characters. However, the practice of gathering everyone together near the end of proceedings, as in the television versions, is certainly included.

This is a very enjoyable Poirot story to read. It has an interesting, complex plot, the characters are portrayed in appropriate depth, it is well written and has good levels of suspense and mystery built in. Is this the start of the permanent resurrection of Poirot?