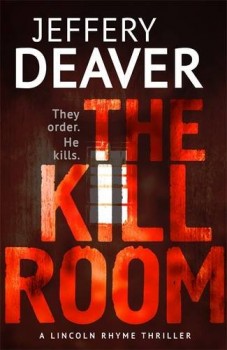 An outspoken critic of US foreign policy is assassinated in the Bahamas. All routes lead to a shady government agency. Lincoln Rhyme and his partner Amelia Sachs investigate.

I’m a big Jeffery Deaver fan. The multi-award winner whose books have been published in more than 150 countries is the master of the labyrinthine plot, but this one seems both forced and unusually heavyweight. He seems to have tried to pack every possible crime situation into one improbable tale. Think Perry Mason joins Lara Croft to tackle an out of control government agency fuelled by misguided and misdirected patriotism, add terrorism, drone warfare, whistle-blowing, free speech, an epicure killer of almost comic sadism, electronic eavesdropping and surround the lot with the usual American soup of acronyms and you’ll get the idea!

Disabled scenes of crime specialist detective Lincoln Rhyme is hired to launch an investigation into a very professional assassination of an outspoken critic of US foreign policy in the Bahamas. All routes lead to a shady government agency run by a man with serious anger management problems. But is the obvious answer just too convenient?  And does the buck really stop there?

Rhyme and the ever-faithful Amelia Sachs, one of the oddest and most easily recognised pairings in crime fiction, gradually piece together the minutiae of the evidence in the obsessional manner fans will recognise from earlier stories as the elaborate narrative unfolds.

All the familiar elements are present, particularly Deaver’s mastery of the tense set-piece and also his ability to provide information in a form sufficiently disguised as to leave you shocked by each new revelation.

A complex legal backstory and some overly stretched background sections, plus the slow build-up and some surprisingly bland characterisation, left me frustrated. But at least this time, Rhyme actually gets out of his home/laboratory – and Deaver saves his best till last when in a deductive leap equal to Sherlock Holmes, Rhyme proves that even the best can be fooled for part of the time.

The Kill Room is enjoyable enough with some clever twists, but generally it’s not up to the author’s best.