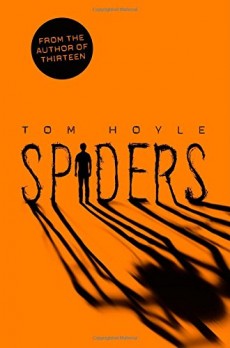 Adam thought he was finished with adventure when he turned 13, but when bad things start to happen to people he’s connected with, his life is about to be turned upside down again.

Tom Hoyle’s debut, Thirteen, was a fast-paced adventure for young adults, written by a man who’s had plenty of experience of how teenagers act and speak, thanks to his day job as a headteacher in a London school.

His main character, Adam Grant, is back, as are his friends from school, Megan, Asa and Leon. Adam, previously targeted by a sinister cult whose leader believed that he had to die before reaching his 14th birthday, is enjoying leading a normal life again, but things aren’t destined to stay that way for very long.

When the bullying Jake Taylor tries to gatecrash a private party at Asa’s house, Adam has no hesitation in standing up to him, but things take a sinister turn when Jake is attacked later that night and it’s Adam who finds him in the street, covered in blood, a cord wrapped tightly around his neck, strangling him.

Trouble dogs Adam’s footsteps and when a boy who crashed into him on the slope on a trip to a ski centre is found dead in the toilets, Adam starts to wonder what is happening, and why someone seems to be trying to implicate him in both the attack on Jake and the murder of a boy he’d never met before they’d clashed on the slope.

Spiders also introduces Abbie, a tough, streetwise teenager who accompanies her father when he goes undercover on a surveillance operation in a Scottish castle, home to a group of people whose activities bear a suspicious resemblance to a cult. Abbie’s father has never really got over the loss of his wife, and it’s not long before Abbie realises that the people he’s got involved with are nowhere near as benign as they seem, and that her father is nowhere near as detached as he should be.

The action in Spiders never lags. The youngsters are pitted against frightening drug-induced hallucinations and ruthless adults who have some very nasty plans for the teenagers they’re keeping in captivity in a cavern beneath the castles. Adam is as resourceful as ever, and Hoyle’s female characters are certainly no damsels in distress. Both Megan and Abbie are every bit as strong and capable as the boys and the book ends in a thrilling cat and mouse chase with Abbie and Adam on the run, as the teenagers have to foil a sinister plot against two of the UK’s foremost cities.

There’s still a degree of omniscient narrator-style head-hopping that can get confusing, but less so than in the first book. Hoyle’s characters are progressing nicely and if he can keep his plots as fast-paced and enthralling as this, it will be good to see Adam and his friends back again.