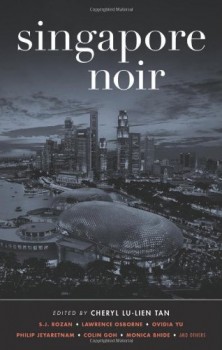 Fourteen short stories about the dark side of the lives of local residents  that belie the common belief that Singapore is a sanitised and dull place.

With one exception, a tale from the humorist Nury Vittachi, (Murder on Orchard Road) this collection is deservedly titled noir. A few have a touch of the supernatural about them; indeed, in one the protagonist is a ghost (Spells), but the majority are grounded in real life and feel all the blacker for being not too far removed from reality.

About half the stories feature home-grown Singaporeans whose lives feature unexpected twists: a young lawyer out of his depth (Last Time), a blackmailed politician (Strangler Fig), a taxi-driver at breaking-point (Smile, Singapore), an indolent boat-boy whose plans receive a pointed set-back (Reel), a psychologically damaged street-sleeper (Mother), a temple attendant with unresolved issues from the past (Mei Kwei, I Love You), and an ageing heavy metal fan trying to retrieve a stolen family heirloom (Saiful and the Pink Edward VII).

Others feature those visiting for a temporary period: a Japanese woman whose involvement with a local detective spells danger (Detective in a City With No Crime), a Japanese businessman whose adventure with a local prostitute is spookily brought to a close (Tattoo), an American expatriate with an obdurate wife (Kensa Sai), and two stories of foreign maids trapped in horrible circumstances (Current Escape, Bedok Reservoir).

None of the stories are more than 20 pages, so great depth is not to be expected; however, the authors manage to convey in a brief sketch sufficient key features of the lives depicted to give them both substance and interest. Across the book as a whole a picture emerges of Singapore, an image at variance with tourist board literature and with the popular conception of a safe but over-controlled conformist society.

A melting pot of several Chinese languages, Malay, and Indian combined with English has given Singapore a distinctive voice and cultural mix. Notwithstanding its essentially urban character, the special character of individual districts contribute to an almost village-like feel, and the inhabitants’ proven practical expertise is accompanied by a continued respect for things beyond secular explanation. All this adds up to a unique atmosphere, exotic while at the same time peculiarly down-to-earth.

The Akashic Noir series now encompasses some 60 books, each set in a particular city from Baltimore to Wall Street, with another 20 plus forthcoming. This volume provides a good opportunity to sample the flavour of the writing from this particular part of the world, and identify authors you might want to pick out for further investigation.