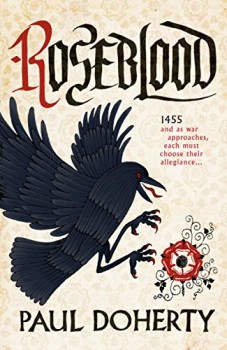 England is poised on the brink of civil war in 1455. Former soldier Simon Roseblood, a sworn Lancastrian supporter, faces growing threats to his position and businesses – and a fanatical group seeking revenge for a massacre in which he had no part.

1455 and England is on the brink of civil war. King Henry VI, a reclusive and pious man, but epileptic, is clearly unfit to rule and only kept on the throne by his energetic wife Margaret of Anjou and her supporters – a noble faction gathered around the de la Pole and Beaufort families.

Gathering strength is another descendant of the great Edward III – Richard, Duke of York.
Five years earlier London had burnt at the hands of the ‘Captain of Kent’, Jack Cade, an Irish killer who had fought for the French in the final disastrous battles of the decades-long war. Now, glutted by returning defeated English soldiers and ragged mercenaries from all over Europe seeking employment with either the House of Lancaster or that of York, the country is in bloody turmoil – and life is cheap.

Simon Roseblood made his fortune in the war in France and is now a successful vintner, an alderman of London – and the gang master for a collection of thieves, whores, desperadoes, smugglers and beggars who surround his Thames-side home and owe him both their allegiance and their lives.

A loyal supporter of Henry Beaufort, Duke of Somerset, he and his family come under increasing pressure from the plotting of Yorkist supporters envious of his power and standing and a direct threat from Richard of York’s battle-hardened clerk Amadeus Sevigny. But there is another and even more deadly threat from a fanatical band of survivors from a French village, which was the scene of a massacre, who have allied themselves to the Yorkist cause to serve their country – and exact revenge.

Paul Doherty, in his many guises, is one of the most prolific thriller writer around with more than a hundred titles to his credit. Prolific though he is, he has never allowed quantity to compromise quality and his encyclopaedic research and knowledge of widely divergent periods of history means his books, which cover many centuries, never disappoint.

The story is woven around fact and the intrigue, deception, cruelty and carnage happened, even if many characters and their actions and interactions are figments of Doherty’s imagination.
Spies, double agents, secrets, betrayal, love, violence, horrible deaths, madness and betrayed trusts tease the reader and it is rarely obvious who is trustworthy, who will meet a brutal end through poison or assassin’s knife for some grudge that is yet to be fully revealed.

Doherty takes his readers at an unremitting pace deep into this world of squalor, stench and death, intricate plots and the vibrancy and colour of 15th century England. His greatest talent is to make history hugely entertaining on the back of a good story. Think the hugely popular TV series A Game Of Thrones, then meld it with what you know of the real-life War of the Roses. There’s only one winner – and it’s not on the box!