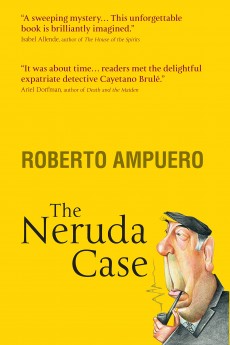 Cayetano Brule is enlisted by poet Pablo Neruda to track down a woman who may have given birth to his daughter, and hones his rudimentary detective skills with a diet of Maigret.

1973 Chile - Salvador Allende's government is assailed by leftists pressing for comprehensive public ownership, and by the forces of the right seeking to roll the clock back on liberalisation. Cayetano Brule, a Cuban, is summoned by the famous and revered poet Pablo Neruda for a personal task.

Neruda is suffering from cancer and charges Brule to find a man, Bracamonte, another Cuban who he met in Mexico some years ago and then engaged in a study of natural remedies for Neruda's condition. To Brule's protests that he has no experience in detective work, Neruda gives him a few books by Simenon and advises him to study the methods employed by Maigret.

Brule agrees to the task but from what he finds in Mexico, it becomes clear that Neruda is more interested in Bracamonte's wife, with whom he had a brief affair, and in the daughter born shortly after that time. Brule's investigations take him to Cuba, to East Germany, and finally back to Chile where he arrives in time for Allende's fall and the triumph of the forces of repression under Pinochet.

Brule's search ties together two strands of significant interest: the life of a world-renowned poet, and the politics of countries within the Soviet orbit during the depths of the Cold War. In a short postscript, the author states his reverence for Neruda, but makes it clear that it would be a disservice to the writer to attempt a portrayal that did less than justice to a complex life, full of contradictions. Ampuero's belief 'that the women in Neruda's life are the ones who hold his secret' explains the focus on the series of relationships and betrayals which help elucidate his life and career.

The political aspect also has interest if only because of the sheer diversity of the countries with a leftist government. It is difficult to find a wider contrast between Cuba, all heat and light, sensual and full of activity, and East Germany, cold and buttoned-up, with the Stasi behind every door. And Chile is a country in chaos, Allende's gallant attempt to introduce a socialist state having opened the door to agitation from all sides of the political spectrum, with the vicious forces of the right (egged on by Nixon in the USA) preparing their bloody coup.

These are serious subjects, but Ampuero's treatment is light, and the travels of the protagonist produce frequent moments of humour. Brule's reliance on Maigret as a source of guidance in his search is not unfailingly helpful, as he comes to realise, but Brule is sensitive to subtle clues and eventually comes by the information he seeks. As it turns out, Neruda has launched Cayetano Brule on a career as a detective, detailed in further books which one can only hope to see in translation.