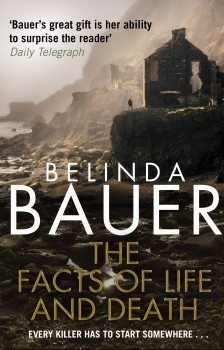 The Facts of Life and Death

When a series of lone women are terrorised and forced to call home so that their mothers can witness their ordeals, the police have no useful leads. Then the sinister game starts to escalate.

Limeburn is the sort of sort of village that the Devon Tourist Board probably prefers to keep under wraps. It’s dank, dismal and thoroughly dispiriting. The sea looms threateningly over a cluster of houses at the base of the hill, and a narrow stream in a deep gully divides one side of the community from the other.

There are only five children in the village, and ten-year-old Ruby Trick is one of them. The derelict, supposedly haunted house at the top of the cliff is, like forbidden places everywhere, a popular place to play, drawing kids like a magnet, despite the disapproval of their parents.

When women in the area start being terrorised by a man who forces them to strip and then phone home, so that their mothers can watch their ordeal, fear starts to stalk the narrow lanes and villages. When the attacks inevitably escalate to murder, the police are still no wiser about who’s playing a sick and deadly game, but the local Cowboy Club decide to form a posse, and Ruby wants to help her daddy find the bad man.

Belinda Bauer is great at writing about dark deeds in ever darker rural communities and The Facts of Life and Death certainly doesn’t break a very successful run. With Ruby, as in her previous book Rubbernecker, she chooses an unusual main narrator. Despite the occasional lapses into some distinctly lyrical but rather non age-appropriate language and imagery, Bauer pulls off a difficult trick and makes Ruby easy to empathise with as she struggles to bridge the ever-widening cracks in her parents’ relationship since her father lost his job.

Rural Devon isn’t given the usual clutch of high-flying, dysfunctional coppers so beloved of crime writers. Instead we get hapless DC Calvin Bridge, constantly preoccupied with the wedding his more forceful girlfriend is busy railroading him into, whether he likes it or not – and it’s increasingly obvious that Calvin doesn’t like it very much at all.

Despite the identity of the attacker not being a closely guarded secret, there’s stacks of suspense as Bauer weaves one of her usual engrossingly bleak tales. If you already like her books, then this won’t disappoint. If you’re coming new to her West Country, just don’t make the mistake of booking a holiday cottage in Limeburn.