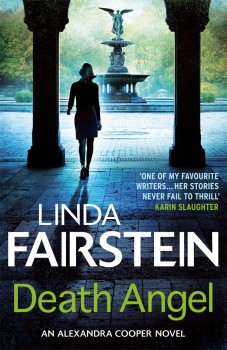 A body is discovered in a lake in Central Park. The investigation leads Alex Cooper and Detective Mike Chapman into the homeless underbelly of the city and the resolution of a 50-year-old unsolved kidnapping.

Assistant District Attorney Alexandra Cooper is the prosecutor in charge of New York’s Special Victims Unit, specialising in sexual crimes. So when the body of a naked girl is discovered in the lake in Central Park, next to the statue of the Angel of the Waters, she is called in to assist the police investigation.

With no identification on the victim and the assailant long gone, the police have little to work with, but a search of the park turns up three interesting items. Two are valuable silver models of structures within the park; the third is an ancient model of a black angel.

The silver models lead the team to the Dakota building, one of New York’s most prestigious apartment blocks overlooking the park. There they learn of a famous unsolved kidnapping. Fifty years ago, a three-year-old girl disappeared from the building and, despite extensive police investigation and press coverage, was never seen or heard from again. The black angel, though, seems to be a relic from an African-American village that was levelled during the construction of the park.

Canvassing the homeless teenagers at a local church mission turns up a girl who knew the victim and she points the investigation towards the people who live in the wilder and more remote parts of the park known as the Ravine and the Ramble. Only when Alex stumbles into a blocked-up cave in the Ravine are the mysteries of both the murder and the kidnapping solved.

It was interesting to read a murder mystery told from the perspective of a lawyer advising on the case. As always, it seems odd that someone not on the police force is so heavily involved in the investigation, but at least the author makes an effort to explain the rationale for Alex’s involvement. This is the 15th Alex Cooper novel and she clearly has a considerable history with Detective Mike Chapman. Their relationship blows hot and cold throughout the book, but there is a strong undercurrent of sexual tension between them. The intrusion of a psychotic judge who has had a fling with Chapman adds a humorous if threatening dimension.

I learned an enormous amount about the geography and especially the history of Central Park from this book, some of it very surprising, and I found the map of the park in the frontispiece extremely helpful in visualising the locations described in the narrative.  Despite the amount of descriptive material, the story moves on at a fair pace, with enough red herrings to keep any whodunit fan happy.  All in all, Death Angel is a great read.