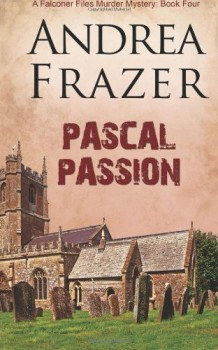 The headmistress of a village Church of England school is horribly murdered. DI Harry Falconer and Sergeant Davey Carmichael investigate, but their inquiries are interrupted by a second killing.

Cosy is as cosy does. And once you’ve got a winning formula, stick with it, especially when there’s a market for it!

The fourth of Andrea Frazer’s published Falconer Files series, set in what can only be called her alternative Middle England, will delight her fans, but drive readers who want mental stimulation, action and at least a connection to reality, absolutely mad.

Take a village, give it an olde English name and people it with middle class or retired, with the occasional yokel thrown in for comic relief. Give most of these inhabitants a ‘past’ or other character defect and allow them to gossip, backbite and feed their own pretensions to their hearts content.

Stage a murder, the more original the better. Call in by-the-book DI Harry Falconer, ex-army, full of routine, pretentions and pre-formed opinions and his sergeant ‘Davey’ Carmichael, a none too bright giant, bumbling and with an appalling dress sense, but nevertheless warm, human, and surprisingly effective – a patronising nod perhaps to the great unwashed made good.

Have them stumble their way through a confused investigation with a few pratfalls for the prissy Falconer, usually involving Carmichael’s very ‘country’ family. Throw in a handful of red herrings about past sins of their bunch of entirely erroneous suspects and allow the real killer to suddenly reveal themselves with almost no police input at all. Voila!

The formidable, soon-to-retire, headmistress of a small Church of England school is found horribly murdered by the children at the start of the Easter holiday weekend. There are a lot of people in Shepford Stacey who had reason to dislike the woman, but was any enough to kill her? Falconer and Carmichael wade around aimlessly until their attention is focussed by a second killing.

It’s just all too predictable – and totally unrealistic.

It would be wrong to detail all the errors in the construction of these tales, because they bring pleasure to so many, but show me the constabulary force which has enough staff – and budget – to lob DIs, particularly those as inefficient as Falconer, around. And would Carmichael, lovely lad that he is, even get into a modern force, let alone pass the sergeant’s exams as his former ‘acting’ rank seems to have disappeared?

You take Frazer’s stories for what they are. The banal is leavened by some shrewd observation – her description of life at an infants’ school leaps out of the page, as does the genuine efforts of villagers to preserve the under-threat institution.

Her anthropomorphisation of a killer fire is truly fine writing – and quite chilling. Her barbed sense of humour also gets plenty of play – and the gradual relaxation of the relationship between the detectives and slow revelation of Falconer’s past is building nicely.

If you enjoy this sort of thing, there’s plenty more to come. The original Kindle self-published series ran to 12 books. And if you haven’t had enough of what I can only call Pratman and Blobin, there’s a bonus for fans – Battered To Death, one of her seven Falconer and Carmichael short stories, is tagged on the end.