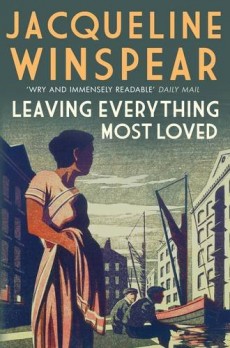 Leaving Everything Most Loved

Maisie Dobbs is asked by an Indian war hero, who believes the English police have let him down, to investigate the killing of his charismatic sister. When a second girl is killed in exactly the same way, Maisie must explore a sub-culture she finds fascinating to get at the truth.

Where does Maisie Dobbs go after this? Her tenth adventure closes with the ‘Sarf Lunnon’ girl-made-good through intelligence, hard work – and a little luck – heading for India to ‘find herself’ and settle the outstanding problems that overshadow her professional and private life.

I can’t see what she will learn on the sub-continent that will help her better the skills she already has in abundance, but there’s always been a strong hint of a spiritual dimension in her make-up and this likeable proto-feminist is clearly set to blaze the trail followed by a later generation of young women. But before she leaves, she must solve the murders of a charismatic young Indian woman and her friend, crimes complicated by the endemic racism of 1930s Britain – and their involvement with a pseudo-church.

Maisie’s character has been balanced from the first somewhat uneasily between serious spirituality and traditional spiritualism. Together with a strong feminist streak, accentuated here by her assistant, the widowed Sandra, and one of the murdered women, plus the racist angle, an almost typecast ‘guru’ and social comment on inequality, this tends to detract from the plot.

This is not so much a crime story as Maisie – and Winspear – putting a series of sometimes not-too-well integrated issues together with a great deal of talk and pseudo-reflection which detract from a fairly simple plot any experienced reader should be able to solve.

These issues, as well as Maisie’s – and her father’s – romantic lives, another breakdown by her assistant Billy Beale and her attitude to her aristocratic lover’s employer, a thinly disguised Max Beaverbrook, obstruct efficient handling of the plot.

They also lead to some horrible contrivances, such as the connection between a runaway schoolboy boy case Billy is working on, the killings and the lingering effects of PTSD on family life. The ending seems manufactured and frankly it’s difficult to understand why the investigation was not wrapped up much earlier by a woman of Maisie’s aggressive intelligence and perception.

But the book is none the worse for all that. It’s what Miss Dobbs has always been all about – a strong woman, influenced by her past and seeking her future against a cleverly portrayed and presented background of the privilege and poverty of 1930s Britain, itself in an era of uncertainty and change in the long wake of the Great War and the stirrings of the end of Empire.

If you want action, violence and raw sex, Maisie’s not the girl for you. But if you want a crime story to make you think about wider issues, just hope, like me, she doesn’t come back from India with flowers in her hair and chanting!