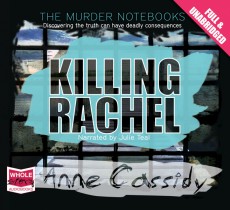 Rose and Joshua believe their parents are still alive, even though no one else does. Joshua is determined to work out a set of cryptic clues and Rose is caught up with events surrounding the death of Rachel, a former schoolfriend.

Killing Rachel is the second in Anne Cassidy’s Murder Notebooks series for young adults that started with Dead Time. The series follows teenagers Rose and Joshua, whose parents simply vanished one evening during a night out together. The police think that they were targeted because of their jobs as undercover police officers and seem certain they’re both dead. But Rose and Joshua believe they’re still alive, and Joshua is determined to decipher the meaning of the cryptic notebooks that give the series its name.

While Joshua is busy with the search, Rachel receives a series of equally cryptic letters and messages from Rachel, an old friend from boarding school. But Rose and Rachel had grown apart and Rose doesn’t understand why the other girl has contacted her out of the blue or why she should have chosen Rose to confide in.

Rose has enough problems of her own to contend with, and ignores Rachel, but is full of guilt when she discovers that Rachel has been found dead and that it looks like she might have committed suicide. Rose returns to her former boarding school to take the letters Rachel had sent her and, once there, she starts to delve more deeply into the mystery surrounding her former friend’s death.

Cassidy neatly wraps up Rose’s investigations into Rachel’s death within the over-arching story of the hunt for her and Joshua’s missing parents, whilst adding in a side-order of teenage angst as Rose realises that her feelings for Joshua are moving onto a different level as she no longer sees him as just her step-brother.

Rose and Joshua are convincing characters, with Rose – as feisty as ever – getting on the wrong side of the police again as she delves deeper into Rachel’s death in an icy lake in the school grounds. The teenagers act and talk like teenagers, and once again, Julie Teal’s narration works well for all the characters, as she seems equally comfortable with both the main series leads, as well as subsidiary characters like Joshua’s tech-savvy friend, Skeggsie.

The only area in which the book falls down for me is the over-complexity of the interwoven flashbacks. This might be easier to manage with the written word, but in a narrative where you rely primarily on the tense used to signal events taking place in the past, Cassidy’s habit of relating flashbacks in the same tense as the rest of the story, can frequently be confusing, leaving you unsure of quite what is going on a lot of the time. But it’s something or a damned if you do, damned if you don’t problem here, as using the correct tense for past events can also become cumbersome very quickly.