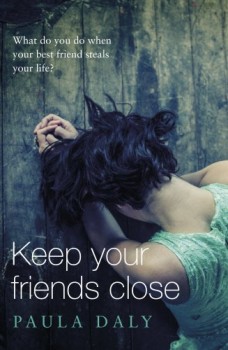 When Natty Wainwright rushes to her daughter’s sick bed leaving best friend Eve Dalladay to care for husband Sean and daughter Alice, she has no idea that her friend will steal her life.

Natty Wainwright works hard to make sure she has a perfect life. She lives in a beautiful house close to Lake Windermere in the Lake District with her loving husband, Sean, and two beautiful teenage daughters, Alice and Felicity, and with Sean she runs an elegant hotel. Unfortunately, she works so hard that sometimes Sean does not get the attention he deserves.

Natty is delighted when her old friend from university, Eve Dalladay, now a psychotherapist based in America, turns up unexpectedly. Then Natty has to rush off to France to care for Felicity who has been taken ill on a school trip. Eve volunteers to stay for a while to take care of Sean and Alice, and Natty gratefully accepts.

While Natty sits by Felicity’s sickbed, Eve embarks on a campaign to win Sean’s affections, a campaign which succeeds so well that when Natty returns home, she finds that Sean and Eve have moved in together at the hotel. As Natty’s world disintegrates, her behaviour becomes increasingly bizarre, but it is plain that Eve is manipulating events in her favour.

Eventually, Natty decides to find out more about Eve and returns to their university. She discovers that Eve is far from what she seems, but how can Natty prove what she has found out and convince Sean that he has been targeted and taken in?

This book falls squarely into the category of ‘chick crime.’ Its main concerns are Natty’s family relationships and her own insecurities, which lead her into some unexpected and self-destructive behaviour. Eve’s come-uppance, when it arrives, is achieved in a strikingly female way, by inaction more than by action.

I sometimes found Natty’s decisions incomprehensible and wanted to tell her to stop, take a deep breath and get a lawyer! Her lack of self-esteem and inability to come to terms with past events prevent her from thinking clearly and cause her to make unwarranted assumptions. Only when events force her to a decision does she start to stand up for herself.

Dark and gritty this book is not, but it is eminently readable and I am sure many readers will relate to the characters’ situations, although not too closely, I hope! It would make a good read for a wet afternoon in front of the fire despite its chilling ending.