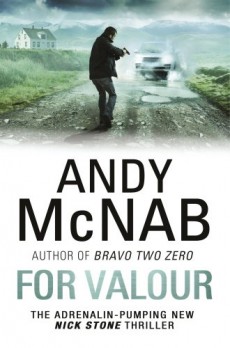 Someone in the Special Forces is going to extraordinary lengths to cover up a death in training. Can ex-SAS sergeant Nick Stone get to the bottom of the mystery, and stay alive on the way?

Nick Stone pays a visit to a priest he knows from his days in the SAS, and is given a cryptic message from an old army mate in trouble. Nick finds him hiding in the hills of Wales, and he's asked to help clear the name of the son of a mutual friend. The son, who followed the footsteps of his father and friends into the SAS, is accused of shooting dead a fellow soldier. Evidence suggests he's a scapegoat. So who really shot the soldier, and why is it being hushed up?

Nick begins investigating, but soon discovers that he, too, is in danger. He discovers a Serbian gang is doing the dirty work, and follows that lead to flush out the real killer. His search takes him across the world, but the trail eventually leads much closer to home in more ways than one.

Andy McNab is giving his character his 16th outing, and if you are a McNab fan, you are going to love it. This book has the usual mix of black humour and bloody violence, but it's tempered by a respectful look at the Victoria Cross and some of those who have been awarded it.

But this is Nick Stone, so there’s no point expecting respect for much else. He doesn't know the meaning of PC. He's a character with a delightfully irreverent turn of phrase that makes it all the more amusing to find he has a network of helpful priests at his disposal. They all come in handy when a Serbian gang is out for his blood and happy to kill anyone in their way.

If you know Nick Stone, you know that being awarded the honour of being his new best mate is unlikely to end well for you. He dispatches a handful of them in the early part of the book, but in a delightful turn of events in Bermondsey, he finds himself with some genuine best mates – and he needs them.

In my review of the last Nick Stone novel, I commented that he was no James Bond. I was thrilled to see that he attempts to disprove me in this book. Given that Moneypenny comes out on top as usual, I'll happily eat my words. However, Nick's tipple is still more likely to be builder's tea than a vodka martini, and that's the way we like him.

The Victoria Cross connection in the book is weaved well, providing a little history lesson without you noticing. There are also lovely tributes to the Land Rover Defender, and the website ARRSE.

Though it's not necessary to have read previous Nick Stone novels, those who have will be pleased to read how he's connecting with his own son in this book, however briefly. Glimpses into his own childhood are both amusing and terrifying. The theme of family, sons and fathers, is a strong one, and again it's woven well.

This book is a great tale of loyalty and pain, but we can rely on Nick Stone to be the champion of truth when it counts, in a terrific showdown set in the Lake District. Maybe it wouldn't be so bad being his best mate after all!