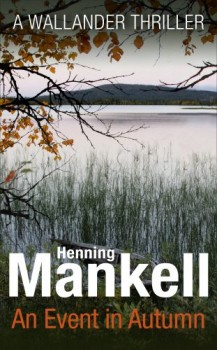 An Event in Autumn

Inspector Kurt Wallander is about to buy a house from a colleague – but he makes a gruesome discovery in the garden.

You won’t be a bit surprised, if you’re a Scandi fan, to hear that An Event in Autumn is suffused with autumnal melancholy. Kurt Wallander dreams of a house, a dog and a new woman – instead, he finds a body in a garden.

According to a fairly lengthy afterword by Henning Mankell talking about his famous creation, this novella slots in just before The Troubled Man, which is Wallander’s farewell. The story was apparently written for a Dutch book promotion and later spruced up for TV so that Kenneth Branagh could stare into the middle distance looking faintly constipated.

The Wallander here, though, reminds me of Rolf Lassgard – slow moving, rumpled, seemingly bumbling and rather like a scruffy Golden Retriever. But he is, if you’ll excuse the pun, dogged and always gets his man.

An Event in Autumn never breaks into a sweat. Wallander is about to buy a house from his colleague Martinson. But his visit turns up something worse than damp or subsidence – a woman’s body in the garden. The case isn’t seen as a priority to start with, so in that manner much beloved of so many Scandi cops, Kurt and Co toddle around and ask some questions, apparently always taking the answers at face value. Any cynicism is never extended to wondering whether people are lying to them …

An Event in Autumn has two of the three ingredients so essential to Scandi crime fiction – angst and trees. There’s plenty of rain, but number three, the snow, comes at the end. By that time you’ve probably been lulled into a pleasantly soporific state.

That’s not to say that the novella is dull – it isn’t. But it’s like a comfy pair of slippers that you really don’t want to throw away because there’s still a smidge of wear in them. And that almost sums up Wallander as well. An Event in Autumn reflects on the passing of time and people getting older, both him and his colleagues. And daughter Linda seems as unfathomable to him as always.

Mankell completists should read this. It’s as elegantly written as ever, with a seemingly fluent translation from Laurie Thompson. It’s also touching – and confirms Wallander as one of the top creations in the genre who was eased into retirement at just the right time.