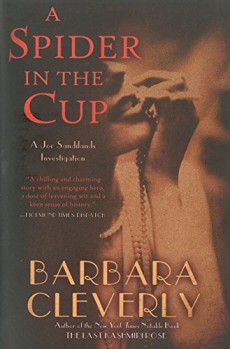 A Spider in the Cup

Assistant Commissioner Joe Sandilands, investigating the body of a young woman found in the Thames mud and also charged with protecting a powerful American senator who’s in London for a key economic conference, discovers the two are linked – and that far more is at stake.

When was the last time a Scotland Yard Assistant Commissioner investigated a murder? Or for that matter acted as minder for a visiting dignitary? Answers on the back of a postage stamp, written with a six-inch paintbrush! When will authors learn to check basic facts? Unless ACs have changed beyond all recognition since the 1930s, the nearest they get to proper policing is shuffling papers on the way to a planning meeting.

Never let the facts get in the way of a good story is a dictum by which tabloid journalists are said to live – and in this 11th adventure for AC Joe Sandilands, Barbara Cleverly seems to have swallowed it wholesale.

This mish-mash involving secret societies, global economic and political power bids, hired killers, mixed with historical, cultural and Shakesperian references – the title comes from a speech by the paranoid Leontes in A Winter’s Tale –  and several gallons more than a cupful of stiff-upper-lip dialogue, is not even a good story.

Cleverly’s earlier books have all been really good mysteries. This attempt to weld a whodunit to a political thriller is just plain confusing, parading as it does an equal lack of knowledge of the US system of government and the hierarchy of the British police.

The body of a young woman is found in the mud of the Thames by a group of dowsers, whose rods respond to a priceless gold Roman medallion in her mouth. The corpse is missing one toe.

The grim discovery is almost on the doorstep of Sandilands’ home and attracts his interest. But he has been assigned to protect a US Senator, in London to represent President Roosevelt at an economic conference to discuss responses to the Depression.

Senator Cornelius Kingstone’s own FBI bodyguard is Sandilands’ former wartime sergeant – deadly, but unpredictable and untrustworthy. Links between the Thames body, a second killing and the conference appear, and protecting Kingstone, whose ballet dancer mistress has also gone missing, leads the AC into a world of raw power, where far more is at stake.

Cleverly has a marvellous ability to paint verbal pictures. Her description of Chelsea Reach at dawn is lyrical – and some of her supporting characters, the ultra-capable dowser leader Hermione Herbert, Sandilands’ smart and unflappable sister Lydia, the crippled Cockney dancer Julia and an archetypal Met pathologist perhaps deserve more development than they get.

The dialogue is stilted, the humour strained, and overall it’s pretentious, patronising and in parts, pompous. This won’t be one for my top shelf and unless you’re a fan of Boy’s Own Paper or Biggles adventures it’s unlikely to be yours either.