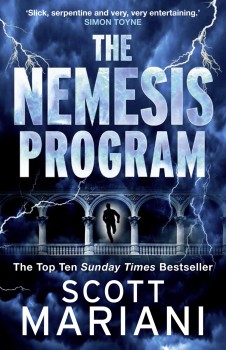 Ben Hope wants a fresh start, including marriage and a future in the clergy, but events conspire against him, whether he likes it or not.

Ben Hope, ex-SAS soldier and private contractor, is trying to put the more colourful aspects of his past behind him. He’s only days away from marrying his girlfriend and is looking forward to getting to know the son he’s only recently discovered and pursuing a career in the clergy. But his rural idyll is quickly shattered when old flame Roberta Ryder reappears in his life needing his help. Ben finds it hard to say no, and even harder to turn the other cheek when someone tries to kill him.

This was the first time I’d met Ben Hope, but the formula soon became clear. The world needs saving and Ben’s the man to do it. Simple. Or in this case, not so simple, as Ben and Roberta try to come to grips with why Claudine Pommier, a friend of Roberta’s, has been murdered in Paris and what the dead woman’s research into the discoveries of Serbian scientist Nikola Tesla has to do with her brutal death.

Scott Mariani delivers a competent conspiracy thriller, but in this instance, I felt I’d arrived a little late to the party and for most of the book Ben Hope seemed dogged by the problem of too much tell and not enough show, although that was remedied to some extent in the closing stages. It was hard to feel invested in any way in the collapse of his marriage plans as I knew nothing about the mainly absent Brooke, and it was equally difficult to empathise with the depth of Ben’s relationship with Roberta, not knowing how they came together in the first place.

A largely limited third person point of view that was verging on the difficult to pull off omniscient narrator style so beloved of a lot of thriller writers only added to my feelings of distance from the characters. But that notwithstanding, provided you can suspend your disbelief from the usual height, The Nemesis Program trots along at a decent pace as Ben plays cat and mouse with his pursuers, getting out of scrapes with sufficient style and invention to finally bring me on board with him and his adventures.

If you already like Ben Hope then I doubt this will disappoint. If you’re new to him and his friends, it’s probably worth taking the time to get to know them in previous books as well.