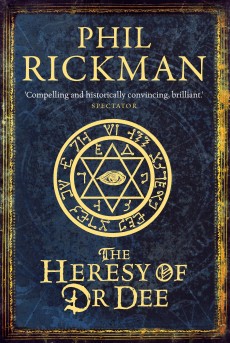 The Heresy of Dr Dee

Queen Elizabeth I’s Astronomer Royal, mathematician and mystic John Dee travels to his father’s Welsh home in search of a fabulous ‘shewstone’, a crystal said to have supernatural powers.

John Dee, a seeker after truth hoping to advance man’s knowledge of both the natural and supernatural or, in the words of his Welsh father, ‘a rooker’? Opinion was deeply divided in Tudor times – and still is. Dee tried to bridge the gap between magic and emerging scientific thinking and was hated equally by the Catholic church for questioning its self-appointed ‘divine’ right to interpret God’s will and the growing power of puritan Lutheranism and its often over-simplistic fundamentalism.

Phil Rickman presents a man who would have been outstanding in any age, a brilliant mathematician, astronomer, astrologer, cabalist, diviner and philosopher, in a sympathetic light. But he does not ignore his faults and other issues: a growing dissatisfaction with progress in learning the secrets of nature, his lack of influence and recognition presaging a later turn to the supernatural, and his descent into disrepute and parody by Shakespeare as Prospero in The Tempest.

Dee, whose father was a minor court official, served three Tudor monarchs and was lucky to survive the reign of Mary in a time of religious and constitutional upheaval and uncertainty. Elizabeth made him Astronomer Royal and he cast the horoscope of the young queen and determined her coronation date astrologically. In the first years of her reign she was the marriage target of every ambitious Continental prince, but the man at the centre of her life was Robert Dudley, with whom she had been imprisoned in the Tower during her half-sister’s bloody years on the throne. Their relationship was the subject of rumour and scandal with Dudley making little secret of his ambition to wed her. When Dudley’s wife dies in unexplained circumstances, even Dee, his nephew and close friend, is uncertain of the truth as Dudley becomes the most hated man in England and a focus for its Continental enemies.

A rash boast to the Queen sends Dee back to the land of his father in search of a fabulous ‘shewstone’, a crystal credited with supernatural powers. Dudley, anxious to be out of London, goes with him, as does a malleable judge, sent to the borders to try a Welsh bandit who is reviving memories of the revolt of Owen Glendower against the English. In the shadow of the hill of Bryn Glas, scene of the greatest Welsh victory where Welsh women were said to have mutilated the dead, they plunge into a whirlpool of dirty domestic and international politics, small town corruption, twisted religion, murder and superstition.

This is a brilliantly executed thriller, historically accurate and cleverly plotted. Former BBC man Phil Rickman, who lives almost on the setting of his book, eerily captures the uncertainty of the time, the unchanging nature and sometimes savage beauty of the border landscape and the guarded and suspicious nature of its people. Dee’s internal struggles, which readers of his debut in The Bones of Avalon will recognise, are offset by a stunning recreation of the murky and often bloody world of Elizabethan times: religious upheaval and politics and a plot which fairly rattles along and will keep you guessing until the final page. This is not an easy read, but it is guaranteed to keep you enthralled as Rickman brings one of the most volatile periods of English history to an utterly believable and violent life.