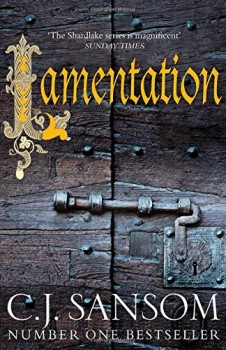 Henry VIII is dying, the jockeying for power has begun and the religious witch-hunts are in full spate. Lawyer Matthew Shardlake finds his life in danger once again as he seeks to recover a radical religious pamphlet written by Catherine Parr.

CJ Sansom’s books are like some vast, intricate Tudor tapestry. There’s incredible detail there, and you can’t bear to take your eyes off it unless you miss something. This tapestry shows great beauty at times – but is also covering up something you’d rather not see.

I find Sansom more terrifying than anyone churning out serial killer books or psychological thrillers. His work is based on truth, and the almost casual brutality of the time is frightening. I was reading the early scenes where a woman is burned at the stake through my fingers. And I owe my neighbours an apology for the piercing 3am shriek late on in the book – if you’ve invested a lot in this series and the characters, you’ll know why when you get there!

Henry VIII is on his last legs and those around him are jockeying for power. There’s a lot resting on who gets to be the guiding hand when eight-year-old Prince Edward ascends to the throne. And the religious witch-hunts across London are increasing in fervour. Religion is driving a wedge between friends and families, and it’s safest to parrot the party line.

The Catholics have their sights set on bringing down Catherine Parr, whom our hero, lawyer Matthew Shardlake, is unable to resist. When he is summoned before her and her loyal uncle, what she tells him could see them all put to death. For she has written a staunchly Protestant pamphlet, Lamentation of a Sinner – and somehow it has gone missing from a locked chest to which only the queen has a key.

As Shardlake follows the trail, which takes in back street printers and religious fanatics, he finds himself mired again in court politics, which he’d sworn to avoid after the events of Heartstone and earlier books. And it begins to look as if the disappearance of the pamphlet may be linked to the radical Anne Askew, who is burned at the stake at the start of the book.

Sansom maintains a judicious balance between the investigation, court intrigue and Shardlake’s domestic affairs – he has the seemingly perfect steward who makes him feel uneasy, whilst religion and Shardlake’s activities are threatening to drive a wedge between him and his long-time monk friend, Guy Malton. And his assistant Jack Barak is supposed to be keeping out of trouble, as wife Tamasin is expecting their second child. There’s also a new addition in the shape of Nicholas, a young gentleman who has been sent to London to learn the law after refusing to marry his parents’ choice of woman for him, and who seems to have an unerring ability to find trouble.

Sansom wears his learning and research lightly – you never feel he’s preaching or that you’re the victim of an information dump. The book finishes with a thoughtful essay where he attempts to separate the fact from the fiction, and to speculate as a scholar rather than just as a novelist.

He’s particularly skilled at inking in characters with seemingly little detail. The ailing, obese figure of Henry VIII dominates the background. And there’s a fascinating sub-plot featuring the litigious and nightmare case of a brother and sister at each other’s throats.

Sansom has a fabulous eye for a cinematic image, both the large set-pieces and the more intimate scenes. The final one of the book is imprinted on my mind, as is the gruesome one that caused the 3am shriek. I’m faintly surprised no one has adapted these books for film or TV – with Anton Lesser playing Shardlake. Mind you, they’d have a challenge on their hands if they did, as it would be almost impossible to do justice to such a rich and detailed book.