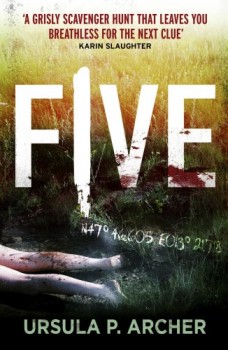 A woman’s body is found in a field in Salzburg, with co-ordinates tattooed on the base of her feet that lead the police into the usually peaceful world of geocaching.

A woman’s body is found in a field by a river in Salzburg. Beatrice Kaspary, of the Landeskriminalamt - the German State Criminal Police Office - joins her colleague, Florin Wenniger, at the unusual crime scene.

The dead woman looks to have been cut down mid-run, but she’s bound and there are tattoos on the base of her foot that turn out to be GPS co-ordinates. The two detectives follow them to a location, where they discover a box containing a human male hand and a note pointing to what sounds like another victim.

Beatrice and Florin find themselves entering the world of geocaching - the activity of using GPS to find containers hidden in various locations all over the world. Upon discovering a container, the finder must sign their name on the paper inside, remove whatever object is inside and replace it. Only in this game, there are clues in the containers, and it’s bodies they’re searching for.

As Beatrice and Florin solve the clues and work out the next set of co-ordinates, they are forced into a waiting game with the killer, and while they wait they try to discover also why the next of kins are keeping secrets from them. With each body, they have more pieces of the puzzle, but it’s a puzzle that grows in complexity with each death.

The two work well together. They’re both strong characters, with a gently simmering chemistry between them that feels like it could go somewhere if Beatrice wasn’t carrying such a large amount of baggage. A single mum, Beatrice has all the problems of any single, working mother, including issues with her boss, Hoffmann.

It’s the character of Hoffmann who is the weakest, feeling like a stereotypical egotistical ladder-climber who doesn’t care about the woman on his team despite her earning the respect of her colleagues and being excellent at her job. It feels like a cheat simply just to add tension into the book but the tension feels false, manufactured.

The plot, though, is intriguing and involving. The rest of the cast of characters are well written and well rounded. Even with no prior knowledge of geocaching, around which the book revolves, the relevant information and facts are wound into the narrative without being jarring. At times the plot does seem to have been stretched beyond its natural length, making this is a long read at over 400 pages, but it never gets boring, the big reveal at the end is the surprise it’s clearly meant to be, and while there will be an inevitability about the final showdown that seasoned crime readers will find almost too familiar, this remains a great read.