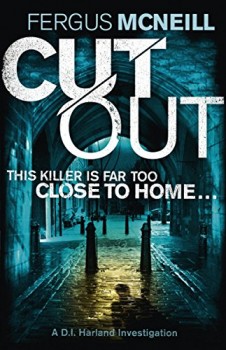 A man has been brutally murdered in the toilets of a seedy nightclub. But when a woman goes missing, DI Harland is told to prioritise the woman’s case – and his new boss wants results.

DI Graham Harland is back, and it’s immediately clear that Fergus McNeill has been putting his research trips to the highways and byways of Bristol to good effect, from the seedy clubs in and around the bottom of Gloucester Road to the more suburban areas of Filton, the close-knit terraces of Totterdown and the sought-after flats of Cotham. I’m just hoping to be able to persuade him to pay a visit to my area, although he did come quite close this time.

Harland has made the move from Portishead to Bristol, and quickly finds himself on the receiving end of a nasty murder in a down-market nightclub. The victim’s eyes, mouth, nose and ears have been filled with superglue and his head and hands attached to the walls of a toilet cubicle the same way. To make matters worse, it looks like Arnaud Durand was still alive at the time all this was done to him.

But despite the unpleasantness of the killing, it looks like Harland is the only one who shows much empathy for the dead man, as there are quite a few coppers in Bristol CID who can’t get too fussed about the death of a known drug-pusher who probably managed to piss off one customer too many.

Harland has barely started to get his teeth into the killing when a woman goes missing. His boss, DCI Pearce, pulls him off the nightclub case, partners him with DS Imogen Gower and tells him he wants results. Harland’s not happy, but doesn’t have much choice. The pair work well together, although when he discovers that Imogen’s partner is female rather than male, he has a certain amount of mental readjustment to accomplish. This is done without too much fuss, and it’s nice to see that Harland hasn’t become swamped by too much of his own personal baggage, with McNeill managing to avoid dredging up yet another all too clichéd damaged cop as a main character.

The search for Laura Hirsh naturally turns in the direction of her boyfriend, Matt Garrick, a garage mechanic. Bound up with her disappearance is the intriguing story of Matt’s neighbour, photoshop artist Nigel Reynolds, a man with few friends and hardly any life outside his computer work, who has developed an unhealthy interest in Matt. Nigel spies on him, intercepts his post and even goes as far as modelling his flat, his clothes and finally himself on the other man, who remains blissfully unaware of the depth of Nigel’s interest in him.

McNeill paints a convincingly chilling picture of Nigel’s gradually escalating stalking. At first it’s easy to sympathise with the loner who no one pays attention to, marginalised at work and practically invisible at home, but gradually it becomes clear that Nigel is taking his interest in Matt to extremes.

The story is told in a series of converging timelines. The various times are clearly stamped, and although it’s a narrative technique I generally have little time for, Cut Out proves that it can be done well without interrupting the flow.

I’m a sucker for books set in my home city, and here Bristol is as much a character in its own right as Harland and his colleagues. Whether the motive for the gruesome murder of the drug-pusher is strong enough to be the lynch-pin of the book is open to some doubt for me, but that didn’t spoil a well-told story of obsession and its consequences.

I hope DI Graham Harland has a long and interesting career in Bristol CID, and that his creator continues to prop up the local economy with his writing trips to our various cafes!