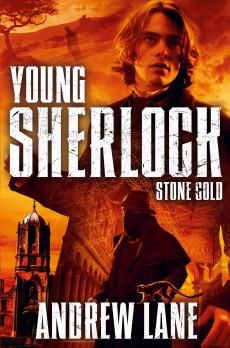 Sherlock has been sent to Oxford to catch up on his studies but, along with his friend Matty, they’re soon caught up in a mystery involving missing body parts.

After his adventures around the world, Sherlock Holmes is back in England and none too pleased with brother Mycroft’s decision to ship him off to Oxford to catch up on his studies. Sherlock would rather stay in London, but Mycroft won’t be swayed, so it’s back to school, whether the teenager likes it or not, to study logic under his brother’s old friend, Charles Lutwidge Dodgson, better known by the pseudonym Lewis Carroll, under which he wrote about Alice’s Adventures in Wonderland.

The move to Oxford is made pleasanter for Sherlock by the presence of his friend, Matty Arnatt, who accompanies him on a canal barge, drawn by Harold, his horse. Despite his misgivings about the move, Sherlock soon settles in, and finds Dodgson’s unorthodox approach to the study of logic fascinating, and equally interesting are the man’s experiments with the emergent field of photography.

It’s not long before both boys are caught up in the twin mysteries of body parts disappearing from the city mortuary and a house that moves at night, testing the courage and ingenuity of both boys as Sherlock, ably assisted by Matty, does what he does best and promptly dives headfirst – literally at one point – into trouble.

Andrew Lane’s Young Sherlock series is going from strength to strength. The plots are complex and intriguing, and Sherlock is deepening as a character, moving closer to the man that we know he becomes. Matty provides an excellent foil for Sherlock in his pre-Watson days and is an interesting character in his own right; he’s certainly not just a plot device to show how clever Sherlock is. Matty’s brave, loyal and resourceful, as is Sherlock himself.

I guessed some, but certainly not all, of the plot twists, as the two boys find themselves caught up in a complex web of intrigue in the Oxfordshire countryside. Lane evokes the period beautifully without being in the least heavy-handed. His characters are skilfully-drawn, particularly Mycroft, ever the spider at the heart of the web, even when he’s off the page for most of the book.

Sherlock Holmes is very definitely safe in Lane’s hands. I’m looking forward to seeing how young Sherlock matures, and I’d like to see what Lane could do with him if he’s able to make a move at any time into writing Sherlock Holmes for an adult audience. But whether you like young adult or adult fiction, and whether or not you’re already familiar with Sherlock and his family and friends, Stone Cold is a great place to start.