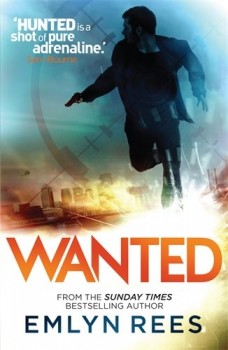 Danny Shanklin is still on the run, falsely accused of a massacre outside a London hotel. He has to track down the people who framed him, as well preventing a disaster of even greater proportions.

Hunted, the first book starring ex-CIA covert ops specialist Danny Shanklin, ended on quite a cliff-hanger, and I was pleased to pick up his continuing adventures when Wanted arrived. But I have to say, although I appreciate the difficulty in setting the scene for a book that has to start where a previous one left off, the first few chapters were a bit of a struggle, and did little to refresh my memory of previous events. A chapter from the point of view of a deranged serial killer calling himself God only added to my confusion. It’s worth persevering with, as when Wanted does hit its stride, it rattles along at a fair pace.

Danny Shanklin is still on the run, falsely accused of a massacre outside a London hotel. No one believes in his innocence, so his only hope for his safety and that of his teenage daughter, Lexie, lies in tracing the people who framed him, including The Kid, computer hacker extraordinaire, previously Danny’s back-up, but also the man who betrayed him.

The trail leads Danny to a top-secret research facility in the Caucasus mountains where he learns that six vials of a lethal, mutated strain of smallpox have been stolen and are intended for use as a weapon of mass destruction. Helped by the giant Ukrainian mercenary, Spartak Sidarov – by far the best supporting character in the book – Danny goes out on a limb time and time again, only managing to stay ahead of his adversaries by the skin of his teeth. There are some great scenes of mayhem, in particular Danny’s attempts to evade capture in the London docklands.

Emlyn Rees is at his best in the pursuit scenes and Danny’s attempts to fight back, but he does have something of a tendency to hit his main character with the stupid stick on several occasions for the sake of the plot, and as a result I did the book equivalent of shouting at the TV screen a few times.

That said, Wanted is a competent, fast-paced thriller that succeeds in bringing part of Danny’s story to a hard-hitting but satisfactory climax, while still leaving the sub-plot of the serial murderer known as the Paper, Stone and Scissors killer wide open.

And yes, it does end on another massive cliff-hanger. You have been warned.