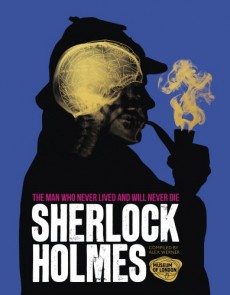 Sherlock Homes: The Man Who Never Lived And Will Never Die

A sumptuously illustrated and authoritative tour into the world of Sherlock Holmes to accompany the Museum of London’s exhibition.

Sherlock Holmes first appeared in print in 1887 and has gone on to become firmly entrenched as the world’s most famous fictional detective. He featured in four novels and 56 short stories by his creator, Arthur Conan Doyle and has given rise to countless adaptations for film, stage, television and radio.

All but ten of the Holmes stories are now in the public domain so far as copyright is concerned in both the UK and the US and there are numerous stories featuring Holmes and Watson. Even during his lifetime, their creator was relaxed about imitations and adaptations, famously replying to a question from American playwright William Gillette as to whether he could marry Holmes off:  "You may marry him, murder him, or do anything you like to him." Authors have taken these words to heart and there is still as much being written about Holmes now as there ever was, with his popularity wholly undiminished.

Against this backdrop, the Museum of London has mounted a Sherlock Holmes exhibition, running until April 12 2015, bringing together artefacts such as pages from Conan Doyle’s own notebooks with props from film and TV, plus a stunning collection of artworks and old maps of London. There’s even an opportunity to listen to Conan Doyle’s voice in a interview. The exhibition is well laid out and utterly enthralling. I would recommend it to anyone with even a passing interest in the great detective.

If you’re unable to get to the Museum of London, the book produced to accompany it, Sherlock Holmes: the Man Who Never Lived and Will Never Die, will give you a good flavour of the exhibition and is a superb creation in its own right. Alex Werner, the head of History Collections at the museum, has brought together contributions by various experts to provide insights into the character of Sherlock Holmes, the mind of his creator, and the world they both inhabited.

The book is authoritative but accessible, taking the reader on a behind the scenes tour of Holmes’ London told in an enthralling narrative and sumptuously illustrated throughout with a mix of postcards, photographs and other illustrations. David Cannadine starts the book off with a chapter entitled A Case of [Mistaken] Identity, which provides a very readable introduction to Conan Doyle, Holmes and London at the end of the 19th century. This is followed by an examination of Holmes’ ‘Bohemian Habits’ by John Stokes, delving deeply into the character of a man who is still capable of enthralling millions of views and readers around the world.

Alex Werner takes a look at Sherlock Holmes, Sidney Paget and the Strand Magazine, showing how the detective’s popularity took off, quickly reaching fever pitch and bringing Holmes to rapidly-growing audience who couldn’t get enough of his adventures. Sidney Paget’s illustrations helped bring Holmes to life and the book collects many of these, showing how his appearance evolved, with every illustrator putting their own stamp on the character.

In The Art of Sherlock Holmes is perhaps not surprisingly the most stunningly illustrated chapter in a breathtakingly beautiful book with a mix of paintings and a series of stunningly atmospheric and evocative black and grey photogravures (explained as “photomechanical prints resembling aquatints of etchings”). These show many different aspects of London during the day and at night, bringing Holmes’ world vividly to life.

Clare Pettit, in Throwaway Holmes, describes Arthur Conon Doyle’s repeated and ultimately unsuccessful attempts to discard his most famous creation. Even trying to price the detective out of the market didn’t work, such was Holmes’ popularity amongst readers that his creator was able to command what was then quite outrageous prices for his work. To end the book, Nathalie Morris takes a look at Silent Sherlock: Holmes and Early Cinema and the book ends with a brief run-down of Holmes’ further career in the cinema and on TV.

This is very definitely a book to savour. I was able to wallow happily for hours, learning more about a character whose popularity shows no sign whatsoever of diminishing and about the fascinating and multi-layered city that was his home. As a complement to the exhibition the book is excellent, and as a standalone, it’s equally remarkable.