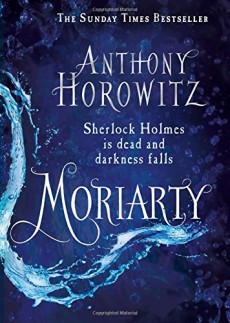 After the tragic happenings at Reichenbach Falls, two detectives join forces to ensure the void left by Sherlock Holmes in London is filled, and the one left by Moriarty is not.

In Meiringen, Switzerland, two men meet after the supposed deaths of Professor James Moriarty and Sherlock Holmes at the Reichenbach Falls: Inspector Athelney Jones, sent from Scotland Yard to attend the scene in respect of the great detective, and Frederick Chase, a Pinkerton agent from New York. Chase is there to track down the criminal mastermind who he believes will fill the void left in the organised crime scene in London. A body has been pulled from the base of the falls, tagged with Moriarty’s name, and in his pocket they find a coded communication that they both believe to be from the elusive Clarence Devereux, the head of a vicious gang of criminals.

Jones and Chase decide to join forces to bring down this gang, and together they travel to London, using the coded note to arrange a meeting with Devereux himself. Instead, a boy has been sent, and when Chase is unable to give the answer to a question clearly meant to provide identity, the boy threatens him with a knife before running off. Jones follows him to a house but loses him when he disappears inside. It is a good start, however, and from their official visit to the house to interview the tenant, a nasty man by the name of Scotchy Lavelle, the game is well and truly afoot.

From there to an American club, the American consulate, the catacombs under the meat market and Scotland Yard itself, the mystery is woven around Jones and Chase, themselves filling the void left by the death of Sherlock Holmes and the absence of his Watson from the investigative scene. For page after page the detectives, and the reader, are led from clue to clue, from gas-lit rooms through smog-filled streets, into a violent world of murder, torture and kidnap.

The friendship between Jones and Chase grows ever closer as they hunt down Devereux together. Jones, it transpires, is a great fan of Sherlock Holmes. So much so that his wife often fears for his safety and his sanity. Chase has his own obsession, his own reasons for going after Devereux. They make an excellent team, catching gang members one by one until Devereux has no choice but to step out of the shadows and show his hand. Then, with victory over evil so close the reader, like the detectives, can almost taste it, there’s a final twist in the story, one with a sting in its tail that is as tragic as it is triumphant.

This is a perfect novel that every fan of Sherlock Holmes needs to read. The scene setting, the sights and sound and smells of London, transport you there. The bad guys are suitably horrible characters who ultimately deserve the terrible fate that is bestowed on each of them. But the true beauty here is the game you, as the reader, don’t even know you’re playing until it’s finished. The plot is true to Conan Doyle’s mastery. Even with Sherlock Holmes and Doctor Watson playing only the inspiration for our heroes and villains alike in this novel, they are still very much there in spirit, as the backbone to the whole case.