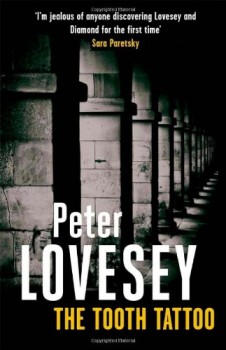 A body is found on the towpath of the river Avon in Bath. It has all the hallmarks of suicide but Peter Diamond, head of Bath CID, is not so sure and decides to investigate.

Whilst not exactly a workaholic. Detective Superintendent Peter Diamond is rather a dull dog and it will come as something of a shock to those readers familiar with his habits to find him taking a holiday in Vienna, accompanied by his lady friend, Paloma Kean. She has managed to get him there only by promising to visit those parts of the city which appeared in his favourite film, The Third Man. Towards the end of their visit, which even he admits to having enjoyed, they come across what seems to be an improvised shrine of flowers on a wall above the Danube Canal. It appears that someone had drowned there and when they read a card attached to a bunch of flowers they find it is written in Japanese.

Back in Bath, at Paloma’s request, Diamond asks his sergeant, Ingeborg Smith, to find out what had happened. It turns out that a young Japanese girl had drowned there and that the post-mortem had reached a verdict of suicide. Paloma had been emotionally very affected by the shrine and when he gives her this news in a somewhat off-hand way she is offended. At the end of the subsequent discussion, which turns into a serious and very personal argument, she breaks off their relationship and walks away.

Although upset by this, Diamond soon finds himself once again engrossed in his work when he is presented with a case involving the apparent suicide of a young girl by drowning. Even when he learns that the girl is Japanese, Diamond has no reason to connect this death with the one in Vienna but, possibly influenced by Paloma’s reaction to that one and his regret at losing her, he decides to investigate.

Mel Farran is a jobbing musician down on his luck and having to take every opportunity to make enough money to support himself. One day he is approached by a mysterious man by the name of Ivan who informs him that he is part of a well-known string quartet and that he and the two other members are looking for a replacement viola player. They feel that he is a good enough musician to join them and are sounding him out.

Later on Mel is vetted by another member of the group and is told that he will hear from them shortly. Eventually, after a trial musical evening, he is accepted into the group. The fourth member is Anthony, a young man who, whilst a brilliant musician, has difficulty relating to his fellow human beings in any normal way and is almost autistic. Mel discovers that nobody is prepared to explain what happened to the man whose place he has taken and comes to believe that the members have their secrets.

Lovesey takes great care to develop the characters throughout the novel and we feel we know the quartet members very well, all of whom seem to come alive when they play and seem to live for their performances only. Although it is clear that they are to be regarded as suspects (particularly since three of them were in Vienna and all four in Bath when the murders occurred) it is difficult to understand what possible motive they could have had. The weakness of the novel lies in that that feeling is justified because when we are actually given the motive for the murders we find it almost unbelievable.

Although very much a whodunit, this novel is unusual because of the attention paid to chamber music throughout. It could, in fact, be regarded as excessive, particularly when the author attempts to explain in words the difference between performances of the same work. Not every reader will be familiar with classical music, and certainly not with that written for a string quartet, and the nuances that the author seems so keen to explain may well be lost on them. At times we begin to wonder if we are ever going to be given any explanation for the murder(s) and when the disclosure is finally made it is in a rather perfunctory and clumsy manner.

Anybody who is not a fan of Peter Lovesey may well be disappointed at what appears to be a return to the rather passe ‘golden age’ of the murder mystery.