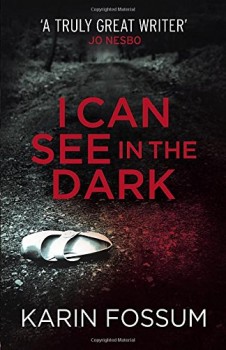 I Can See In The Dark

Riktor is a strange man without friends who tortures old people at a home where he works, but is surprised to be arrested for the murder of one.

Riktor is a strange alienated man who spends his spare time sitting in a park observing the regular visitors. His only human interaction is at the Lokka nursing home, where he works as a nurse. His job feeds his fascination with death, and gives him the opportunity to torture patients who are too old and weak to resist or inform.

When Randers, a local policeman, appears at his door Riktor fears that a recent and even more heinous piece of criminal activity has been discovered, and is taken aback when it turns out that one of his patients has been suffocated. In prison on remand Riktor forms closer relationships with others than ever before – is it possible that he will be able to change and make a real life for himself?

I Can See in the Dark is told entirely by the protagonist in the first person and we come to know him well. Near the end of the book he is interviewed by a psychiatrist and a few labels are attached, but after even a few chapters we understand him to be curiously detached from the rest of humanity, introspective and centred on himself.

He laments his inability to connect, particularly to attract a woman, but it is clear that he lacks any form of empathy with others that would allow a true friendship to arise. The author builds a very convincing picture and although Riktor is not a character to like, the portrait generates a certain amount of curiosity about the outcome.

Unfortunately Riktor is such a clear threat to others that it is difficult to avoid hoping that he will be recognised for what he is as quickly as possible, and suitably confined. If his condition (if it can be so termed) were not so severe, the new opportunities created by his prison experience might give rise to the possibility of development, and whether these were fulfilled or dashed there would be a dramatic tension to be relieved. Karin Fossum does not, however, go this route; no redemption is forthcoming. This no doubt is a much more realistic depiction of the prognosis for someone in his 40s like Riktor.

By telling a story through the eyes of the criminal, the impact of his behaviour is downplayed and left to the reader to visualise, which in some ways has even greater impact. But as far as the protagonist himself is concerned there is no development, just the working out of an impulsive, damaged personality to an inevitable conclusion. Given the distaste that most readers will have for him, it is difficult to know whether I Can See in the Dark is a book likely to appeal to a wide audience.