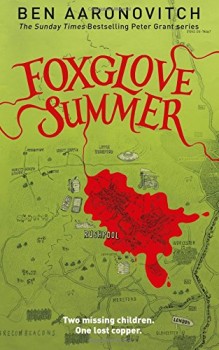 Peter Grant takes a trip to rural Herefordshire to assist in the search for two missing children.

You can take the copper out of London, but you can’t take London out of the copper. In the fifth of Ben Aaronovitch’s entertaining blend of police procedural and urban fantasy, PC Peter Grant, apprentice wizard, finds himself very definitely out of both his native environment and his comfort zone in the wilds of Herefordshire.

Peter is sent out to assist the local police in the hunt for two missing girls and check whether this is a ‘Falcon case’, police-speak for what most people simply know as weird shit. The way Peter treads delicately around local sensibilities is one of the most fun parts of the book. Senior officers known that weird shit happens, but no one really wants to talk about it, unless it’s convenient to pass the buck in that direction, of course.

Retired magic practitioner, Hugh Oswald, is the obvious starting point for Peter’s enquiries, but the man’s in his 80s and doesn’t stay awake for very long at a time, so it’s hard to see how he could be involved, but he does provide Peter with some tantalising glimpses into the past history of his boss and mentor, Thomas Nightingale. And for Nightingale fans like me, there are some even more tantalising crumbs of information about the rout of Ettersberg. If you’re new to the series, that will mean diddly squat, but if you’re not, then you’ll know just what a draw that is! As well as that, there are ancient hill forts, mysterious bees, invisible unicorns and Peter getting to be badass. It’s hard to see how things could be better!

Aaronovitch’s characters are as diverse and sharply-drawn as ever, from local DC Dominic Croft, whose boyfriend is a farmer, harassed DCI David Windrush who really doesn’t want any funny business on his patch, and the bed-hopping families of the two missing girls, Hannah Marstowe and Nicole Lacey. Everywhere Peter goes the shit just gets weirder until he begins to think that the aliens the locals are always talking about are likely to be the least of his problems. But then Beverley Brook turns up and Peter ends up walking stark naked down a road in broad daylight. River goddesses tend to have that affect on people.

The Rivers of London series is very definitely going from strength to strength, and this is a perfect blend of police work and the stuff that officers prefer not to talk about. Even away from London, the sense of place is as strong as ever. Rural Herefordshire and its folklore comes vividly to life, and the humour never detracts from the underlying seriousness of the case of two missing children. Peter’s asides and observations are as sharp as ever, although unless you’ve got a fly-trap memory for the multitude of acronyms, they do have a slight tendency to be over-used.

Plot-strands are clearly still being set up for the future, and I’m sure we’ve not seen the last of Lesley May and the Faceless Man, although they do both take a backseat on this occasion, as does Nightingale, but the story is strong enough that I really didn’t miss them. There simply wasn’t chance. I devoured Foxglove Summer in two sittings and immediately wanted more. A year seems like a very long time to wait!