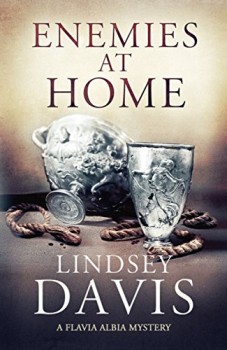 Investigator Flavia Albia is hired to discover who killed a newly-wed couple. The main suspects are their slaves, but they have sought sanctuary in a temple. Together with aedile Manlius Faustus, Falco’s adopted daughter sets out to uncover the truth.

Rome under the Emperor Domitian – a vain, arrogant, man, probably as mad as a box of frogs, but a hundred times more dangerous. Violence and corruption pervades every avenue of life, but to the city’s huge slave community all this means little. They are disposable, body and soul the property of their owners and ruled by an ancient – and brutal – series of laws, with failure to comply often punishable by death.

Informer – private eye to us – Flavia Albia is asked to investigate the murder of a newly-wed couple where their household slaves, under suspicion, have sought sanctuary in the Temple of Ceres to avoid a ghastly death in the arena.

This second of the Flavia Albia series really establishes the titular heroine – the baby found by reluctant legionnaire Marcus Didius Falco and his partner, senator’s daughter Helena Justina, in the ruins of London after its gutting by Boudicca’s rabble, and adopted.

Now a widow and approaching 30, she has followed Falco into the uncertain trade of informer – using her formidable mind while also adopting much of his flippancy, tendency to take short cuts and the ability to tell a barefaced lie which made her adoptive father so useful to the great Emperor Vespasian.

Some of her adoptive family have made the series jump with her – her senatorial Camilli uncles, a couple of the dodgiest lawyers you could wish not to be sued by and her imperious mother. Delightful as they are, they play only minor roles. This is all about Flavia, her case, her problems and the man she wishes was in her life, the aedile Manlius Faustus.

The office of aedile was peculiar to Rome, a combination of popularly-elected minor magistrate, trading standards, weights and measures, health and safety, fire officer and sheriff. They were also responsible for organising public games and had powers over licentiousness and disorder, in particular over baths and brothels and the registration of prostitutes.

Manlius Faustus represents all that was best in the Empire – upright, honest and diligent, determined to do his utmost serve his plebeian electors. Oh, yes, and he’s also quite good looking!

This slowburning romance – he fancies her too, but relative stations in class-ridden Rome are a hindrance – started in Flavia’s debut and looks set to continue and for almost the first half of the book is about the highlight as the investigation goes almost nowhere, as many, of course, do.

The body count rises, Davis sprinkles plenty of red herrings among genuine clues, but in the end Flavia Albia solves the mystery and the guilty – and some not so guilty – meet the implacable weight of Roman law.

After her huge successes with the magnificent Falco series, Davis could write these follow-ups in her sleep, but still maintains her meticulous attention to detail, with well-drawn characters and a realistic portrayal of first century Rome despite the use of modern language.

Flavia’s adventures, like those of her father, make no aspiration to being serious literature, but these books are charming, clever, funny, very readable and extremely entertaining. I loved her debut. This confirms that like the roguish Falco, she’s here to stay!