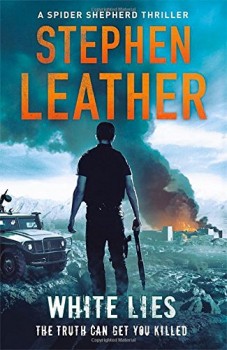 Dan ‘Spider’ Shepherd is in big trouble. A rescue mission goes horribly wrong and he ends up in the hands of al-Qaeda. But fortunately for Spider, his M15 controller Charlotte Button is a woman who doesn’t always feel bound to follow the rules.

Anyone who’s been following the adventures of ex-SAS man Dan ‘Spider’ Shepherd for a while will know exactly what to expect: an undercover operation at the beginning to set the scene – check; a de-brief with his MI5 controller, Charlotte Button – check; the obligatory six monthly evaluation with psychiatrist Caroline Stockmann to bring us up to date with Spider’s recent exploits – check.

There’s nothing wrong with familiarity and as a routine, it works pretty well. It provides a good way of setting the scene for anyone new to the series and for old hands it doesn’t slow up the action too much.

An undercover operative that Spider was once responsible for has been sent into the field again. This isn’t a very bright move considering that his cover was blown on his last job, so it’s not much of a surprise when Raj Chaudrey is taken hostage in a training camp for jihadists in the badlands of Pakistan.

Amidst a departmental pissing contest between M15 and M16, a plan is hatched to send Spider in with the Pakistani special forces to pull Raj out, but when it all goes horribly wrong, it’s Spider who’s left behind in the hands of al-Qaeda.

Luckily for Spider, Charlotte Button is a woman who doesn’t always feel bound to follow the rules. She wants to get her man out, and she’s prepared to gallop past quite a few lines in the sand to get what she wants.

As I’ve probably admitted a few times before, I’ve got a soft spot for a nice straightforward thriller with just enough technical detail to lend veracity but not so much that the plot founders on a mass of irrelevant asides thrown in to make the author look knowledgeable. If that’s your poison as well, Stephen Leather has a tried and tested formula for delivering just that and White Lies is no exception to the rule.

If you already like the series, I don’t think this one will in any way disappoint. Button takes on a deeper and harder edge, Spider proves as competent as ever, the action is well-paced and equally well-depicted and it’s as topical as ever. If you’re new to Spider’s escapades, just jump on board and enjoy the ride.