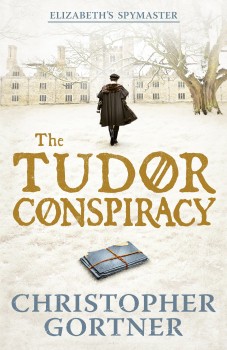 Disgraced spymaster William Cecil recalls Brendan Prescott to his service to uncover a plot to destroy Anne Boleyn’s daughter, Princess Elizabeth. But Brendan finds himself a double agent, working for the Catholic Queen Mary in a court filled with intrigue, treachery and death.

Disgraced spymaster William Cecil, a staunch supporter of Elizabeth, recalls young Brendan Prescott to his service to help save Princess Elizabeth from the Tower and early death, but Brendan, whose role in the overthrow of the attempted coup by the Dudley family and the brief ‘queenship’ of Lady Jane Grey made him known to Mary, soon finds his loyalties tested as he is forced to act as an unwilling double agent for both queen and princess.

While the Tudors, particularly Henry VIII and Elizabeth, have attracted much attention, the reign of Mary, Henry’s daughter by Catherine of Aragon, has excited relatively little interest. Yet this was a crucial period in England. Mary, a Catholic, was committed to rolling back her father’s religious changes. With an attempted coup overthrown, only Elizabeth remained as a rallying point for Protestant dissent.

Had Mary’s marriage to Phillip of Spain launched a new dynasty, the Reformation would have been rolled back – and the history of Britain totally different. Instead, within two years, Mary, who came to the throne to popular acclaim, earned the soubriquet ‘Bloody Mary’ for her handling of the Wyatt Rebellion and her religious persecution.

Mary’s court at Whitehall was a hotbed of intrigue, with representatives of the Spanish dominated Hapsburg empire urging the queen to dispose of her sister and enforce the old religion. Elizabeth, ‘exiled’ at Hatfield, was the focus of many plots – although how much she knew about Wyatt’s carefully planned, though abortive, revolt is a matter of historical debate.

In this second book in the Spymaster series, clever and fallible Brendan is a young man being forced into an adulthood he finds hard to understand by unfolding events. His reaction to being at the heart of so many conspiracies while hiding his own secrets is both realistic and sympathetic.

The intricate plot races along with the intrigue, passion and drama of Mary’s court contrasting nicely with the sights, sounds and smells of Tudor London. Although a follow up, the plot unfolds naturally without stalling when past affects present, so this episode can easily be read as a standalone.

Gortner brings the period to life with colour, passion, realistically violent action and maintains the tension throughout with well-drawn and believable characters. His Tudor court is a far less glamorous and much more dangerous place than normally portrayed – and all the more realistic for that. The Tudor Conspiracy is an exciting and first class read, and this maturing series is a must for fans of the period.