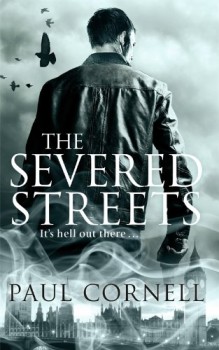 Amidst rioting on the streets of London, DI James Quill and his team have to find a supernatural killer with a distinct resemblance to Jack the Ripper.

It's a hot summer and there's rioting on the streets of London. When this turns to savage, unearthly murder, DI James Quill and his team are called in to investigate. Their investigation will lead to pain, sacrifice, betrayal and hell itself and someone is hacking their dreams.

This is the second of Paul Cornell's urban fantasy/police procedurals. It's set six months after the end of the events of London Falling, and the impossible murder of a senior politician in a locked car is the first case Quill, Ross, Sefton and Costain have had since then. Using the Sight, they can see the supernatural entity that murdered the man and the silver trail it leaves behind. That trail leads to the haunts of Jack the Ripper, the offices of a newspaper magnet, an old pub with a very exclusive members only bar, an auction where the prices are in what you are willing to sacrifice, and hell.

The team is hampered by their ignorance of the supernatural world they now work in. Their efforts to find out more are hindered by the suspicious nature of those who inhabit it and an internal turf war. Help is offered by some unlikely sources, but it comes at a price. In addition to finding the killer, Ross and Costain have their own investigation to pursue because Ross wants to get her father out of hell and Costain wants to stay out of it. Those aren't compatible aims and it will come down to who is willing sacrifice what, and who can be trusted. And trust and sacrifice are needed because this isn't the Ripper reborn – Quill and his team have to deal with a much older, much deadlier opponent.

There is much to like about this book. It's a great story. It's exciting. There are a couple of well-worked set pieces in a trip around the murders of Jack the Ripper and a very plausible trip to hell. The team is getting developed; Ross, in particular, has some terrible choices to make and Sefton and Costain are becoming more than just the gay black police officer and straight black police officer.

There are also some problems, some minor and one major. The minor ones are mostly of structure. It feels chaotic and when you have sections labelled 'A Few Minutes Earlier' and 'Two Nights Ago' where the rest of the book has a linear timeline it feels jerky. There is also the clunky intervention from MI5, who descend from the heavens, deliver a timely bit of information and then disappear again. Also, considering they're six months later on, the team seems to have progressed no further in their understanding of the magical world. What have they been doing in that time?

Those are minor quibbles and I would still recommend this as an enjoyable read. But, and it's a big but, I have one real problem with Severed Streets. And that's Neil Gaiman. Gaiman is a well-known real-life fantasy and sci-fi author. And he's in this book. Not just as a background character adding, as WS Gilbert put it, artistic verisimilitude to an otherwise bald and unconvincing narrative, but as a participant in the story with a real and vital part to play in it that does not involve being an author. It completely broke the story for me. I have no idea why Cornell made this choice but it meant I lost faith in the world he'd built.

That's why I have two verdicts in this case: one that recommends Severed Streets and one that doesn't. Buyer beware on this one.