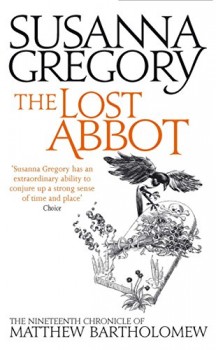 Physician/sleuth Matt Bartholomew travels to Peterborough to investigate the disappearance of the Abbot and his friend, the town’s only doctor. They ride into a web of ambition, avarice, lies, rivalries and deception.

The imposing, exquisitely dressed figure of Benedictine Brother Michael, senior Proctor of Cambridge University and a Fellow of Michaelhouse, strides out of the mists of Fenland history and Susanna Gregory’s fans will know that Matthew Bartholomew will not be far behind, returning for his 19th adventure as medicus to the poor of city, corpse examiner and amateur sleuth.

Gregory this time sends Matt and Michael the flat, miserable 40 miles outside their normal hunting ground – presumably because the body count that usually accompanies their searches threatens to depopulate Cambridge – and selects Peterborough for an instant population reduction.

Almost the whole of the Michaelhouse fellowship accompanies them on an investigation ordered by the Bishop of Lincoln into the disappearance of the town’s Abbot and his friend, the only doctor. For regular readers it’s like an old friends’ reunion as the ex-soldier Master Langalee, the irascible Franciscan William, the marvellous Clippsby, who talks to the animals and gets more sense out of them than most men get from each other, and Cynric, Matt’s pagan Welsh book-bearer and effective bodyguard, arrive in Peterborough to be met with hostility by abbey functionaries, already fighting over who will replace the missing abbot.

The prologue, set almost 50 years before, should whet the appetite and provide a major lead to the thrust of the story, but Gregory is an absolute master of her genre and this is typical – well plotted, full of misdirection and false leads, rich in detail, full of humour and marvellous interplay between the characters, all of which builds to an action-filled finale.

But it is her sense of time and place that really sets her apart. Her research is accurate and detailed, many of her characters named after real people, are skilfully drawn as is the background of monastic abuses and excesses in a country still not entirely Christian, and the growing discontent of the poor which would eventually lead to the so-called Peasants’ Revolt.

Gregory brings the 14th century to a realistic, rugged and sometimes quite unpleasant life to create a most enjoyable, although quite demanding read. She is truly a mistress of her craft and her extraordinary ability to recreate the period is allied to a real sense of drama. The Lost Abbot is complicated and interesting enough to keep the mind focussed, yet surprisingly fast-paced and entertaining. If you haven’t come across Matt Bartholomew yet, you can do no better.