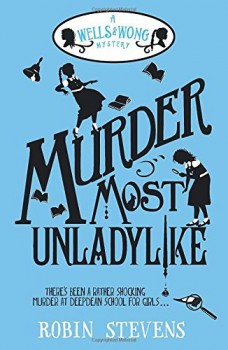 Daisy Wells and Hazel Wong are President and Secretary respectively of the Wells and Wong Detective Society at Deepdean School for Girls. But when they set the society up, they hadn’t been expecting their first major case to be the murder of Miss Bell, their science mistress.

Hazel comes across Miss Bell’s body in the gym, looking as though she’d fallen from the balcony. But by the time Hazel finds someone to help, the body has vanished and the blood has been scrubbed from the floor. Daisy and Hazel, the third form’s answer to Holmes and Watson, know that if the teacher’s fall had simply been an accident, the body wouldn’t have been spirited away like that.

Miss Bell’s disappearance is explained away on the basis that she left a hurried letter of resignation before leaving the school, and gossip has it that she was disappointed not to have got the job as deputy head. But Hazel is adamant she saw a dead body, and Daisy believes her.

Hazel Wong is an astute narrator. Despite her close friendship with Daisy, she sees through the other girl’s pretence at lack of cleverness, and soon realises that she’ll have to adopt similar measures to attain any sort of popularity, as the old adage that no one likes a clever kid definitely holds true amongst the pupils at Deepdene.

Daisy is pretty, popular, rich and rather arrogant. Everyone wants to be her friend, but it’s Hazel that Daisy chooses to set up her secret society with, probably to allow herself to shine while Hazel does her bidding. But Hazel is no push-over. Together the two girls do their best to investigate the death of Miss Bell, and just when they think they know who the killer is, events take another shocking turn.

Murder Most Unladylike is a splendid hark-back to the golden age of boarding school stories for girls from Enid Blyton, Elinor M Brent-Dyer, Angela Brazil and many others. It’s set in the 1930s, so there’s no mobile phones, Facebook or other social media to contend with, and quite how the book will resonate with today’s teenagers remains to be seen. But this is a cleverly plotted, elegantly-written school romp for teenagers (and nostalgic adults) in the very best tradition of Malory Towers, St Clare’s and the Chalet School, with a lively dash of St Trinian’s thrown in for good measure.

This is an assured and capable debut, and as a huge fan of school stories, I definitely hope that this turns into a series, as the words on the cover proclaiming this to be ‘A Wells and Wong Mystery’ suggest.