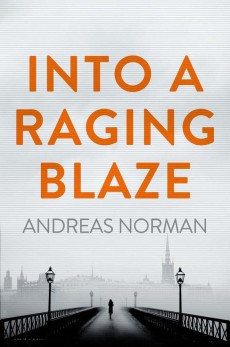 Into a Raging Blaze

Carina Dymek is a high-flyer in the Swedish Ministry of Foreign Affairs. When she’s handed a leaked document, it sends her career up in flames and attracts the unwelcome attentions of the British MI6.

If you’ll excuse the bad pun and the cliché, this one is a slow burner. But if you have the time and patience to persevere with it, the plot finally catches light and is absolutely incendiary.

Carina Dymek is a high-flyer in the Swedish Ministry of Foreign Affairs. She catches the right eyes in meetings and is being tipped for promotion. And her private life is good too – she’s met Jamal Badawi, a Swedish Egyptian civil servant, and they’re off on holiday soon to Cairo to meet his uncle and family.

And then a mysterious man called Jean gives Carina a USB stick after a meeting in Brussels – her outburst at that meeting seems to suggest to this European bureaucrat that she has a conscience. But this one seemingly innocuous act brings Carina’s life crashing down as she does what she perceives to be the right thing and passes this classified document onto her bosses. Enter stage left Sapa (the Swedish security service) and Britain’s MI6.

Into a Raging Blaze apparently predates Edward Snowden, but it could quite easily have come from the front page of The Guardian newspaper. It’s a thriller heavy on detail, but that painstaking building up of Carina’s world and that of the security services pays handsomely later on. So if at any time you feel like setting the book aside, then don’t!

Much of the action takes place behind closed meeting room doors or in small flats. Most chilling of all, though, are the later scenes on the streets of Brussels, those seemingly innocuous moments where someone’s fate can be decided in a split-second and what goes on in the name of counter-terrorism.

Andreas Norman, who is apparently a career diplomat himself, has taken that advice to write about what you know, and launched one heck of a debut novel into a clear, blue sky. Yes, it probably could do with an edit to ensure the earlier chapters are less of an information dump. But when you look back on the book, very little is superfluous.

The characters who stick in the mind most are the female ones – Carina, Bente Jensen of Sapo, and Alex Gustavsson, a computer hacker. Most of the Brits seem to be faceless thugs and their Swedish counterparts rather grey men in offices. Bente dominates the later parts of the book, as she becomes convinced that Carina has been sacrificed.

All the media leaks suggest that this story is entirely plausible, with the plans for a secret European spy agency, and the way the British and the Americans are the ones calling the shots. Sadly, those who need to know how the rest of the world sees us probably won’t read this book.