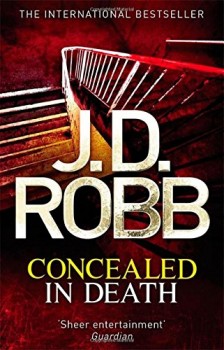 When Roarke starts the refurbishment of a dilapidated building, he is horrified to find the bodies of twelve young girls concealed in then walls. As Eve investigates the murders, her childhood is brought flooding back as she is determined to identify the girls.

Roarke’s latest acquisition is a dilapidated building on the West side of New York. Given the honour of the first swing of the sledgehammer in the refurbishment programme, he discovers two bodies wrapped in plastic sheeting and concealed behind a false wall. As Eve Dallas, NYPSD Lieutenant Detective and Roarke’s wife, starts to investigate, ten more bodies are discovered, all hidden in the walls of the old building.

As the identification of the bodies continues, it becomes clear that all are young girls.  Some have been reported missing and show signs of an affluent, well-cared-for childhood, while others have had a harder life and are identified from their juvenile arrest files. The building was last used as a refuge for street children and the deaths seem to have occurred soon after the refuge closed. Eve’s investigation takes her to Philadelphia and Nashville Jones, the brother and sister who ran it, now doing similar work in a more upmarket location.

As the story unfolds, Eve learns of a Fagin-like character who ran a gang of street girls and taught them pick-pocketing, petty larceny and a variety of scams, but who gave them shelter and imposed some order on their lives. Through him, Eve identifies some children who survived living on the street and built themselves better lives.

Eve is convinced that Philly and Nash know more than they are admitting, and what actually happened to their brother, Montclair, supposedly eaten by a lion while on a missionary trip to Africa?

Both Eve and Roarke are profoundly affected by the investigation, as both barely survived abusive, neglectful childhoods. The book paints a stark picture of the lives of children from inadequate backgrounds, as applicable today as to the children of 2060. The girls in this book have slipped through the cracks in the system, doing whatever was necessary to survive until their risky lifestyle caught up with them.

Concealed in Death is completely un-put-downable and I read it at a sitting. The more of Robb’s books I read, the more I want to learn about Eve and Roarke and the more they come to life.  With 38 books in the series so far, long may they continue.