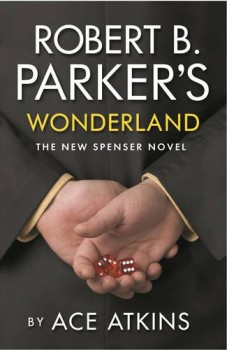 When a developer trying to buy the condo where Henry Cimoli has an apartment resorts to dubious tactics, Henry calls in a favour from Spenser.

It feels like I’ve been reading Robert B Parker’s Spenser books all my life, which is probably pretty much true. I’ve grown up with the tough, intelligent Spenser, although he’s aged considerably more slowly than I have. But after Parker’s death in 2010, I wasn’t too sorry that Spenser’s story had come to an end.

In the last few books, Parker’s inimitable style had become something of a caricature, skeletal rather than simply sparse, the story sometimes progressing by little more than a dialogue between Spenser and Susan Silverman, a character who attracts very polarised views, and I’m afraid I’ve never been one of her fans. But Ace Atkins has proved to be immensely capable of continuing the series, cleverly rolling the books back to an earlier era in feel, with more description. Wonderland doesn’t go as far back as A Catskill Eagle in style but very definitely has the feel of vintage Spenser from the 1990s.

When Henry Cimoli asks for help, Spenser doesn’t hesitate. He’s known Henry for years and in all that time the old boxing trainer has never asked for a favour, but a developer attempting to buy Henry’s condo has resorted to dubious tactics and Henry wants back-up. And what Henry wants, Spenser is happy to give.

His investigations lead him into the murky world of big business casinos, wanting to cash in on a prime waterfront location in the derelict Wonderland dog racing track, and Henry’s condo is the key to what the developers need. With young sidekick Zebulon Sixkill, aka Z, at his side, Spenser starts to do what he does best: royally piss off just about everyone he comes into contact with.

Susan Silverman is off stage for most of the book, but acts as Spenser’s sounding board throughout, providing a useful device for explaining some of the twists and turns of the plot. Hawk, sadly, is also absent. I would very much like to see how Atkins handles him, but I had to console myself with a walk-on part by old associate Vinnie Morris now riding shotgun for the extremely dodgy Gino Fish.

The dialogue is as snappy as ever, the characters all act and sound true to themselves, but there’s just a bit more description that helps to ground the action very successfully. Atkins is definitely a safe pair of hands for Spenser and everyone who inhabits his world.