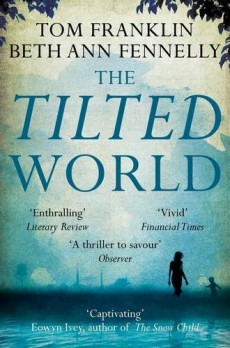 Two prohibition agents are sent to a small Deep South town to investigate the disappearance of their predecessors.

The Tilted World is a thriller for those who like literary fiction, or alternatively, literary fiction for those who like a thriller. It’s also a magnificent and touching love story and grippingly accurate portrayal of one of the greatest natural disasters in American history – the great Mississippi flood of 1927 which drowned 27,000 square miles in up to 30 feet of water for four months and killed hundreds.

Gold Dagger winner Tom Franklin has collaborated with his poet wife Beth Ann Fennelly and the end result is spectacular. It’s a beautifully written, raucous, gritty and amazingly vivid story, and together they produce a unique, captivating, and often lyrical single voice.

Literary buffs can debate whether Franklin is really a crime writer, or like William Faulkner, merely utilising the genre. Whatever your opinion, this epic portrait of the Deep South
is a brilliant combination of loyalty, loneliness, betrayal, love, corruption and duty which plays out in the often dirty realism of Prohibition America in the shadow of a great disaster.

Franklin and Fennelly’s characters are beautifully and precisely realised, from the backwoods bootlegger Dixie Clay, tough, isolated and longing for a child to replace her dead baby, to Ingersoll, the blues-playing orphan, turned war hero sharpshooter and revenue agent struggling to find a place in life. Lesser characters and even bit part players come to life with equal reality and are perfectly complemented by the almost surreal landscape in which they battle for survival as Dixie and Ingersoll struggle to reconcile individual interpretations of right and wrong.

After months of rain, the Mississippi has reached critical levels and the town of Hobnob is at risk as its creaking, daily reinforced levee faces a twin threat from the rising waters and saboteurs from New Orleans who will sacrifice the smaller town to save their own city.

Ingersoll and his partner Ham are sent to investigate the disappearance of their predecessors, but when they discover an orphaned baby they cannot imagine how this will change them. Dixie Clay brews moonshine for her feckless, violent and ambitious husband and mourns the loss of their baby while her marriage crumbles and she nurtures a terrible fear about the fate of the missing agents.

This is a book to savour and one you will remember long after you have put it down – it’s a gripping, lyrical novel set against a great natural disaster and weaving a clever and unforgettable story of love and survival.