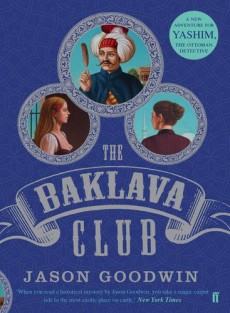 Ottoman detective Yashim becomes drawn in to a dispute between supporters and opponents of European powers fought in the heart of the 1842 Ottoman Empire.

This is the fifth outing for Yashim, a detective working for the Ottoman Court. At the house of his good friend the Polish Ambassador Palewski he meets three young men from Italy, whose opposition to the Pope’s hold over the Papal states make them unwelcome at home. Palewski considers them lightweights, dubbing them the ‘baklava club’, but in fact they take instructions from ‘La Piuma’, who plans an assassination. Yashim also runs into Father Docherty, a dipsomaniac Catholic priest seeking evidence for Papal claims to historic legitimacy.

At the same time he is asked by the valide, the mother of the last Sultan, to entertain Natasha, a visitor from Russia who is seeking help to persuade the Tsar to release her father from Siberian exile. As the valide does not leave the palace it falls to Yashim to show her the sights of Istambul. He also demonstrates his cooking skills for her at his home, and it is not long before they form an attachment. Although he is a eunuch, Yashim is still sexually active.

Things start to go awry when Palewski meets a boat carrying Czartoryski, a Polish statesman on a secret mission to the Sultan to gain support for nationalist aspirations. A third party intervenes, a shot is fired, and Czartoryski disappears. Then a young government official is murdered. Yashim needs to work out quickly who is behind these events to save the Sultan from embarrassment, and protect his friends, particularly Natasha, with whom he has become very close.

The re-creation of the past is always a challenge, and Jason Goodwin meets this with aplomb. His depiction of the streets of Istambul, and the people who inhabit them, is detailed and convincing, and constitutes a substantial area of interest. Yashim’s exploits in the kitchen are a delight, and a great stimulus to the appetite. He is a believable character, humane and broad-minded, but quick to action when necessary.

As to the detective story, given the limited number of characters the reader is introduced to, the number of possible outcomes is constrained and the final reveal comes as no great surprise. However, the ending is well handled and has a familiar if depressing political ring to it.

Doubtless Goodwin’s history of the Ottoman Empire, Lords of the Horizons, provided him with the factual underpinning that gives his settings such a realistic feel.