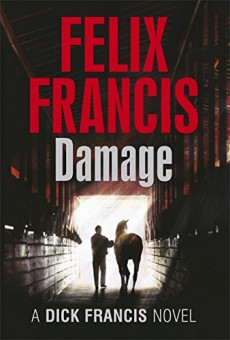 Jeff Hinkley, an investigator with the British Horseracing Authority (BHA) Integrity Service, puts his career and life on the line to single-handedly prevent the collapse of British horseracing.

Jeff Hinkley is an investigator with the British Horseracing Authority (BHA) Integrity Service. In disguise and undercover at Cheltenham racecourse, he witnesses the murder of a bookie in cold blood. This event is only one of many strings to a strange fiddle that sees him single-handedly investigate an attempt to blackmail the BHA, with the entirety of British horseracing under threat.

Meanwhile, he is also trying to prevent his step-nephew from being convicted of dealing Class A drugs, and he's deciding if he wants to marry his girlfriend or leave her. And all this while his sister is having treatment for cancer. In the main part of the action, Jeff is up against a clever and calculating foe, but still manages to juggle all the balls and save the day.

For the first 72 pages of the book, I felt I was suffering under the melange of random plot threads that Felix Francis had thrown my way, but more than that, I was plagued by the uncomfortable feeling that Jeff, the protagonist – and with whom we share the adventure, as with all Francis books, in the first person perspective – just didn't feel like a Jeff. On page 73, however, we learn his true name, and from that point forward, everything seemed to click happily for me.

It's still a page turner from the off, despite the randomness of it all, and the sat nav level of transport detail, but it gallops along at a nice pace throughout, never quite losing the reader at any of the hurdles. Jeff, naturally, gets a little banged up, and he doesn't muck things up to a level of annoyance, so he's bearable. Oh, and he's also ex-military, just to add one more angle. There's an action finish that is tied up rather better than some other Felix novels so far, with a rather grisly end that lives up to the book's title. All in all, this is a worthy, if slightly odd, addition to the Francis stable.