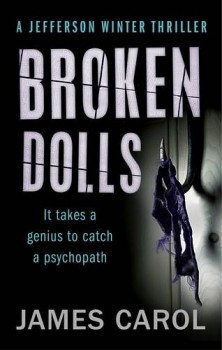 When young women are abducted, tortured and lobotomised before being released, the detective inspector in charge of the case calls on Jefferson Winter for help. Once an FBI agent, Winter is now a private consultant helping law enforcement with particularly difficult and harrowing cases.

Patricia Maynard was the fourth victim of a serial attacker who abducts, tortures and lobotomises his victims before letting them go. Now there’s a fifth victim, Rachel Morris, who left home for an illicit meeting with a man she met on the internet as revenge for her husband’s infidelity, but never returned. She’s being held in a basement by a lunatic who gets off on controlling her, torturing her and trying to break her.

Detective Inspector Mark Hatcher, of the Metropolitan Police, calls on Jefferson Winter, a specialist, to help. Winter is ex-FBI, a profiler whose reputation has been sealed by the fact that he is the son of a serial killer. Winter isn’t bound by police protocols, or even by the laws of whichever country he’s working in. Hatcher partners him with the stunning Detective Sergeant Sophie Templeton, a more than capable policewoman who matches Winter flirt for flirt, intellectual leap for intellectual leap. Together they take on the serial abductor dubbed ‘Cutting Jack’, unaware that they’re dealing with something worse than a psychopath.

This is a nasty book, even for a serial killer novel. Half of the story is told from the point of view of Rachel Morris, held captive by a madman, and that’s the half that’s hard to read as she lives through anyone’s worst nightmare. The story from the other side, Winter’s investigations with Hatcher and Templeton, are told in the first person from Winter’s point of view, something that may put some readers off.

Most of the characters are beautifully written. Jefferson Winter in particular is a fascinating construct, and although the freedom from working within the confines of the law makes some aspects of the novel unbelievable, it also makes them exactly what the reader wants. Templeton is almost too good to be true, but she, like the other good guys, isn’t a stereotype.

Which is more than I can say for the bad guys. The villain of the piece is straight out of several good books and at least one movie, with predictable motives and a slight twist in the plot that sticks out for pages and pages, causing little more than a roll of the eyes when it is finally revealed.

For a seasoned reader in the serial killer genre, the character of Jefferson Winter is definitely one to follow, even if this isn’t the best example of his work.