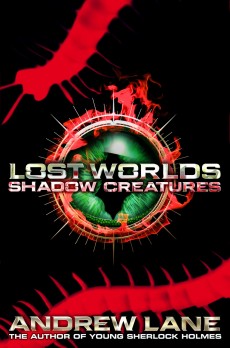 In the search for new DNA and a cure for his paralysis, Calum Challenger and his friends plan to hunt down a shadowy creature in Hong Kong. But when Calum's taken hostage and taken to New Mexico, no one knows he's gone. And he's not the only one in trouble.

In the second book in Andrew Lane's Lost Worlds series for young adults, Calum Challenger, left paraplegic by a car accident that killed his parents, is planning a new adventure in search of the DNA of unknown creatures to find a cure for paralysis. Travelling to Hong Kong with his teenage friends – Natalie and Gecko – is ex-special forces soldier 'Rhino' Gillis, hired to look after them.

Meanwhile, Calum has agreed to try experimental bionic legs, and Tara, the tech expert of the group, is striking up an internet friendship with a boy who claims to share her interests.

The Hong Kong team finds a giant centipede and not the giant rat they were expecting. Calum’s personal quest leads him into trouble in New Mexico. Tara is betrayed and kidnapped. 'Rhino' Gillis bumps into an old friend who's trying to kill him. They are all in impossible but never improbable danger.

Most of the main characters in Lost Worlds are teenagers, and Lane manages to make them both likeable and believable. He also makes excellent use of Rhino Gillis, who fits neatly into the team despite his military background and deadly abilities.

This book develops the characters, and also brings more intrigue into the background of the team, including the adults in the story. Emotions are more raw, secrets are kept and told, and there are hints of things that still need to be resolved.

But this is primarily an adventure story, with action and peril and excitement. Despite the various locations across the globe, it's all linked cleverly. The setting of Hong Kong in particular is vivid – from the high-class hotel to the dirty warehouses, the surroundings are tangible. But it's Tara's kidnap situation that draws, and her rescue and who executes it that brings a cheer.

Lost Worlds: Shadow Creatures becomes a rollercoaster of a ride that makes you smile one minute and grip the edge of your seat the next. It's an enjoyable read that leaves you extremely keen to see another instalment. You just want to know what happens to them all next, and I sincerely hope we find out.