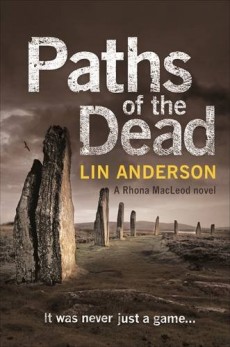 Paths of the Dead

The body of a young man is found at a Neolithic stone circle in Glasgow. DI Michael McNab thinks the killing is drug-related but forensic scientist Rhona Macleod isn’t convinced.

When Amy MacKenzie agrees to go with a friend to a meeting at the local spiritualist church, she takes with her a healthy dose of scepticism, but that doesn’t stop her being singled out by Patrick Menzies, the medium, who he insists he has a message for Amy from her son. The only problem with this is that Amy’s sure her son is still alive. She’d seen him at home just before she’d left the house. But Menzies is insistent that her son Alan has a message for her.

I have to hand it to Lin Anderson – that was a hell of a way to grab the attention at the start of the book, and the rest easily lived up to the opener. When the body of Amy MacKenzie’s son is found inside a Neolithic stone circle, his hands severed and a pebble with the number five scratched on it in his mouth, DI Michael McNab is convinced the killing is drug-related but forensic scientist Rhona Macleod isn’t convinced. The ritualistic aspects of the death make her think there’s more to this than the obvious, but although the medium, Patrick Menzies, is immediately under suspicion, there seems to be nothing to tie him in into the death.

McNab is, to put it mildly, struggling a bit. Newly-promoted to DI, he’s missing the stabilising influence of Bill Wilson, his old boss, who’s now on long-term leave nursing his wife. McNab is self-aware enough to know that he’s handling the team badly, but not self-disciplined enough to be able to do anything about it. His working relationship with Rhona is heading rapidly for the rocks and against his better judgement he even ends up involving profiler Magnus Pirie, who’s not exactly ever been his go-to person for assistance.

When other bodies start turning up in similar situations, McNab comes under pressure from his superiors to deliver results in an investigation that seems to be going nowhere. He’s drinking on the job and starts to take risks, but when he starts to go distinctly off-piste, that’s when he’s back in his element.

The nice thing about Anderson’s characters is that none of them seem to have come out of central casting. McNab’s verging on the traditional bad boy cop, but he’s none the worse for that, and his scraps with Rhona always seem very real. For me the only main character that lacks the same spark is Magnus Pirie. He always seems to come dangerously close to something of a tell not show, never quite coming alive in the same as McNab, Rhona or her sparky and always entertaining sidekick, Chrissy, but that’s a minor niggle.

The plot moves along at a good pace through a series of well-described and atmospheric Scottish locations, never tipping over into implausibility, whilst combining a certain unexpected mysticism with the high-tech world of online gaming.

If you haven’t taken a trip around Scotland in the company of DI McNab and Rhona Macleod, I’d certainly recommend getting to know them, and Paths of the Dead makes a very good introduction to their world.