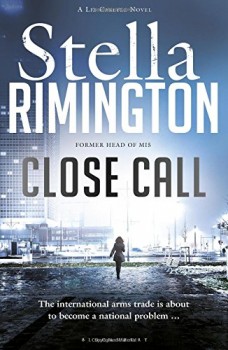 MI5 agent Liz Carlyle has to deal with a blast from her past, as well as a possible home-grown terror plot that kicks off in the Yemen.

You don’t read Stella Rimington’s thrillers for the beauty of her prose or the complexity of her characterisation. Instead, you hang on to her coattails for the fact she knows what she writes about.

MI5 agent Liz Carlyle routinely finds herself embroiled in cases that no doubt originate in some form from the spooks’ casebooks that Rimington herself used to preside over. And if you’re bored with excessive private life revelations in thrillers, rest assured that you won’t get gymnastics between the sheets here – Liz’s love life is all thoroughly tasteful.

What you get in Close Call is a plot that seems to involve some fairly obscure nations of the world, alongside some familiar faces from past books. The story kicks off in the Yemen where a CIA agent learns of dodgy arms shipments with a British link. It then shifts to Paris where a clandestine meeting is observed, with mixed results, and then moves on to Berlin.

Add a Manchester gangster, suspected police corruption, people-smugglers from Dagestan and a possible home-grown British terror suspect, and the spooks community in the UK, US and Europe is twitching badly.

Close Call brings a couple of blasts from the past – one for Liz from her early days when she was assigned to work with some old dinosaur cops, and a re-appearance for a traitorous ex-colleague of Liz’s French opposite number – and lover – Martin Seurat.

Liz’s colleagues and the CIA agents tend towards the sketchy, even though we’ve met them plenty of times in previous books. Peggy Kinsolving, Liz’s protégée, pushes her glasses up her nose a lot and pores over books and computer screens, and then goes home to her faintly dull boyfriend. The rest of the Brits specialise in putting the stiff into upper lips. And the Americans appear to be mainly dumb jocks.

Close Call works if you’re prepared to overlook the fact that Rimington’s writing is rather staid, even when she’s focusing on some pretty gruesome goings-on. There is, though, a shocking scene involving someone close to Liz, which had me squawking in horror. And where it wins all down the line is from the inside knowledge that makes you suspect that what happens on the pages is scarily close to reality.