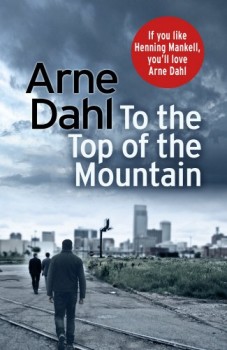 To the Top of the Mountain

Something dangerous is approaching Sweden and only Detective Paul Hjelm and his colleagues at the Intercrime team can stop it.

The welcome return of A-Unit in Arne Dahl’s third novel features a seemingly disparate but talented team of police officers gathered from all over Sweden to investigate violent, international crime. However, all is not happy as the team was disbanded in disgrace at the end of the excellent Bad Blood.

They are doing the equivalent of pottering around Stockholm investigating seemingly unconnected issues and cases.  Hjelm and Holm, the sexual chemistry still bubbling under the surface, are investigating the death of a football fan in a bar; Nyberg is monitoring paedophiles, Norlander and Söderstedt are in a prison trying to get to the bottom of an explosion which sees the eye of a former dealer and associate of an exiled Serbian drug baron embedded in the wall of his cell.

Jan Hultin is literally on gardening leave, and he is asked to re-form A-Unit while undergoing the Sisyphean task of mowing his lawn. How Dahl manages to draw the members of A-Unit together again is one of his strengths; it is the Scandinavian crime fiction equivalent of ‘hey kids, let’s put on a show, and let’s put it on right now!’

However, there is plenty of time for coffee, Danish pastries and character development. Dahl is a skilful, deft writer and although Paul Hjelm is probably the main character in the series, the author is wonderfully democratic and we are given insights into each of the main players’ lives and motivations. Nyberg, Norlander, Holm, Chavez and Söderstedt are not merely satellites to Helm’s shining brilliance, simply because he is not brilliant. He is human, as are his colleagues, which adds to their appeal.

The plot becomes more intense and complex as the strands being investigated by A-Unit combine, but at no point does it flag. Dahl maintains interest and credibility to the very end and I very much look forward to the next outing of A-Unit.

Tracy Johnson is a teacher who loves reading and lives in Bristol.