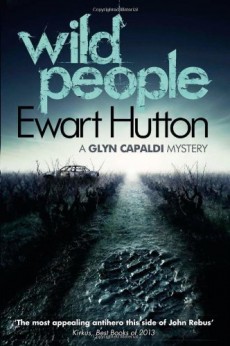 When a young woman dies in the back of Glyn Capaldi’s car after a botched operation to catch a gang of car thieves, he’s determined not to let her death be swept under the carpet as nothing more than a tragic accident.

DS Glyn Capaldi is back and I jumped on his latest outing with all the unseemly verve of a rat disappearing down a drain. In Wild People, Hutton shows a side to the Welsh Valleys that the tourist board would prefer to keep under wraps.

Amidst the car crime, drug dealing and even drug manufacture, there’s a sort of low level nastiness that’s more usually associated with the town rather than the countryside. But anyone who’s ever had their car broken into in an out of the way car park in the Brecon Beacons, or elsewhere, will understand why the local police want to crack down on that sort of thing. It’s just a shame that they botch the operation and end up chasing the suspects through a forest at night with precious little chance of catching them, while Capaldi decides to take the easy way out and slope off back to the station with the one suspected offender they have managed to catch, a teenage girl.

When his car crashes on a blind bend, injuring him and killing the girl, Capaldi feels as guilty as hell, blaming himself for the accident, even when everyone else is quick to write it off as just one of those things. A tyre must have blown, not your fault, take all the time you need, but Capaldi doesn’t want his colleagues’ platitudes or their sympathy. He wants to get to the bottom of what happened.

When Capaldi persuades his friend Graham Mackay, an ex-SAS soldier, to take a look at the scene of the crash, Mac is able to put a different slant on what might have happened, fuelling Capaldi’s growing suspicion that things might not have been as accidental as they first seemed.

With his usual casual disregard for authority, Capaldi proceeds to make a general nuisance of himself, getting backs up with ease left, right and centre, sometimes with the blessing of his superiors and sometimes not. When the tortured body of a local bad lad is found in a burnt-out car well away from his usual patch, Capaldi becomes even more determined to uncover the truth, regardless of how many toes he steps on.

The skilful pen-portraits of Capaldi’s various harassed colleagues are one of the great strengths of Ewart Hutton’s writing, alongside the first person narrative with its spare, humorous style. Capaldi is fast turning into one of crime fiction’s most engaging of unreliable narrators and his long-suffering bosses, DCI Bryn Jones and DCS Jack Galbraith, make a great double-act, with plenty of dark humour.

The deliberate foreshadowing that caused minor irritation in the earlier books has been reined in here, and the plot thickens splendidly as Capaldi does his inimitable impression of a bull in a china shop in an idyllic rural retreat where the rich and famous come under a pseudonym to be pampered and to de-stress. With Glyn Capaldi, you can guarantee that if there’s a large cow pat waiting to be stepped in, he’ll do just that, and will then trample all over your Persian carpet as well. He has all the subtlety of a brick in a rather smelly sock, but for all that, it is great to see him thoroughly out of his depth when Mac introduces him to the even darker world of black ops.

There are more twists and turns than the old road through the valleys, and if you like your books with the sharp edge of realism and a sense of place so strong that you can even smell the sheep, then this is undoubtedly the series for you.