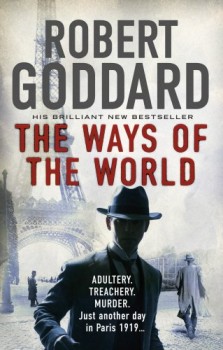 The Ways of the World

James Maxted is informed that his diplomat father has been accidentally killed in Paris whilst attending the Versailles peace talks in 1919. He’s not convinced of the cause of death and in spite of danger to his own life, begins to investigate.

The year is 1919 and James Maxted – known as Max to virtually everybody – has just been discharged from The Royal Flying Corps, having spent two years as a prisoner of war. He is part of what used to be known as the landed gentry and is planning to use part of his father’s estate to set up a flying school, along with Sam Twentyman, an engineer sergeant who had been responsible for keeping Max’s plane in the air. His mother informs him of his father’s death in Paris and asks him to go there with his elder brother, Ashley, with a view to clarifying the circumstances of her husband’s death.

It does not take him very long to decide that he does not believe the French police version of what happened – an accidental fall from a rooftop. His suspicions do not appear to be shared by his brother – one of the more well-drawn characters in the book – who is anxious to get the body home, arrange the funeral and then claim his inheritance as the elder son. In this he has the backing of his appalling wife.

Max, however, feels strongly enough about what he regards as the suspicious death of his father to insist on staying behind, in spite of Ashley’s objections. On a number of occasions he admits to himself that he is not qualified for the investigation and before too long the reader ends up agreeing with him. There is a lot of coming and going and more and more characters are introduced, some of them very mysterious indeed.

One problem with the book is that there is very little to suggest that the events are actually taking place in Paris. There is no sense of atmosphere, in spite of the frequent mention of streets with French names, the bridges over the Seine and the Seine itself. The local colour and customs associated with Paris are almost entirely absent. The English characters and the scenes set in England, on the other hand, are more convincing, particularly when it comes to the family’s reactions to the late Sir Henry’s will.

But the story is mainly set in Paris and it is here that it breaks down, mainly owing to a surplus of characters – policemen, secret service men, diplomats and petty crooks. There is one scene involving a Japanese diplomat that is almost a parody of the language and behaviour of diplomacy. He is supposed to be passing on information but the double – sometimes triple – dealing described leaves the reader at a loss to know precisely what is being said. When the famous and controversial Zimmermann telegram is introduced it is almost the last straw.

The point is reached where, with not too many pages of the book left, there are so many loose ends that it is impossible to see how the author is going to bring them all together. However, Robert Goddard has a simple answer to that and suddenly the words TO BE CONTINUED appear and we are left in medias res.

If it was always intended that this story was going to involve more than one book, then this should have been made clear. There is certainly no mention anywhere on the dust jacket that book is part – for instance – of a trilogy, or that a sequel is planned. An ending like that, without prior warning, is wholly unsatisfactory and it is likely that readers who have been left in mid-air may well not feel inclined to find out what happens next if another book does appear.