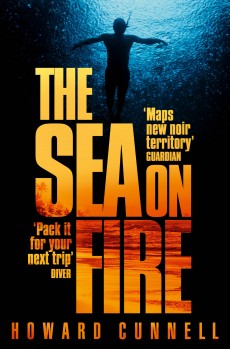 The Sea on Fire

It should have been a simple trip to the Red Sea for dive guides Kim and Garland, but add drugs and booze to the equation and things start to go badly wrong.

For diver Kim, a trip to the Red Sea with his old friend and mentor, Garland Rain, should have been the diving equivalent of a walk in the park. He’s an experienced diving guide who knows the area, knows all the potential pitfalls and knows how to deal with clients. But nothing is ever that straightforward in life. Kim is under pressure from his wife Araba to spend less time away from home and more time with her and his children.

The problem is that Kim still has diving in his blood and can’t give up the thrill of floating weightless in an almost unimaginably beautiful undersea world, seeing sights that live with him in his dreams when he’s back in the drab, grey, winter world of London. So when Garland beckons, Kim comes running. It’s just a simple job, he tells himself, acting as a guide on Teddy King’s boat in the Red Sea, on a trip laid on by Teddy for his employees as a thank you for their services, with only two paying customers on board.

What Kim doesn’t anticipate is getting entangled with King’s beautiful young personal assistant, Jody, even though he knows that sleeping with one of the clients is very definitely unprofessional. It’s also unprofessional to drink too much and take drugs, but that doesn’t stop him, despite Garland’s very evident disapproval. It’s hardly surprising when things start to go wrong, and as the two professionals on board, it’s Kim and Garland who are going to end up carrying the can.

The Sea on Fire gets off to a rather slow start, laden with weighty back story for both Kim and Garland, but the quality of the writing is enough to overcome that. The descriptive passages are lyrical enough to make up for any flaws. Anyone who enjoyed the diving adventures of Jacques Cousteau aboard the beautiful yacht Calypso and can remember the names Hans and Lotte Hass will feel immediately at home with The Sea on Fire.

Howard Cunnell, a former professional diving instructor, is very definitely writing about what he knows and that shines through in every description of an exotic undersea world peopled with beautiful fish and colourful coral. The Red Sea has a dangerous beauty, though, as many divers, including my friend Rob Palmer, have discovered to their cost. Plan the dive and dive the plan are words to discard at your own risk.

Cunnell tells the story of how it all starts to goes wrong for both Kim and Garland when a diver is lost and in many ways, the book is a study in consequences. There is a price to pay for everyone’s actions. Sometimes they pay their own price and sometimes someone else pays for it, but there is no escaping the consequences of anyone’s actions in this story. The characters are well-drawn, even though Kim is a hard narrator to sympathise with as he brings so many of the problems on himself.

This is a book for anyone who has ever enjoyed books and television programmes on what lies below the surface of the water that covers approximately 70 per cent of the earth’s surface, and even if – as it does for me – diving itself holds little or no appeal, the descriptions in this book will entrance even as much as its narrator irritates. And the denouement in the muddy brown waters of the Thames is as chilling as it is inevitable.