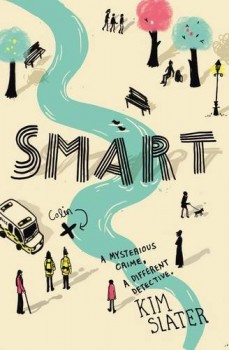 When Kieran discovers the body of a homeless man in the river, everyone seems determined to put this down to nothing more than an accident, but he’s sure there’s more to the man’s death than that.

Smart is invariably going to attract comparisons with The Curious Incident of the Dog in the Night-Time, so let’s get that out of the way now and move on. Yes, there’s a young narrator with some unspecified form of Asperger’s or autism, but Kim Slater’s first novel stands on its own two feet and will make a huge impact on anyone who reads it, be they the younger end of the teen market the book is aimed at, or an adult audience.

It’s not easy being Kieran Wood, age unspecified but in Year 9 at school. He knows he’s different to other kids. They laugh at him and call him names, but he has his own coping strategies and is very good at putting them into effect. He has a book he writes things down in, and he keeps his precious notebook hidden inside a Beano album, away from the prying eyes of his stepbrother.

Kieran notices things that other people don’t and when he finds the body of a homeless man in the river, he expects the police to take more of an interest in the case, as Kieran believes the man has been murdered. But everyone else seems intent on writing off the death as nothing more than a tragic accident that happened because the man had fallen in the water, too drunk to save himself.

But Kieran knows there’s more to the man’s death than that and he makes a promise to Colin, the man whose body he finds, that he’ll uncover the truth of his death, and as he says the words aloud, that means they’re a binding promise. Kieran knows that words are powerful, but equally well, he knows how to handle bad words aimed at him.

This is by no means a comfortable book for any adults like me, brought up on a staple diet of Enid Blyton’s Five Find-Outers and Dog. In this case, the dog is called Tyson and the poor animal is kept locked up and half-starved in the garden shed by Kieran’s abuse stepfather. Kieran is frightened of Tyson, banished to the shed after biting his stepbrother, but he still goes out to talk to the dog and feeds him sandwiches.

Kieran’s narration is heartbreakingly clear; we see what he sees and experience what he experiences, and at times his story is almost excruciatingly poignant as he struggles to make sense of the clues that the adults in the story simply don’t see. But at no time does this turn into a cutesy tale of a young amateur sleuth. The writing is always razor-sharp with no wasted words or unnecessary exposition, and the title is very well-chosen.

Kieran is very definitely smart and so is this clever, moving, and at times uplifting, book. You’ll be there every step of the way with this always in-character young narrator, willing him to succeed and desperately hoping that there’ll be a way out for him from a horrible home life.