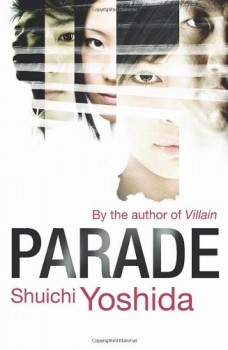 Five young people share a small Tokyo flat and similar lifestyles, but how much do they really know about those they live with?

Four 20-somethings share a flat in Tokyo. They have come together pretty much by chance and seem to interact as superficially as is possible in a very small flat. Apart from Koto, who waits by the phone for a call from her TV soap-star boyfriend, the others have jobs. Their routine is seemingly little disrupted when 18-year-old Satoru arrives and becomes the fifth de-facto resident.

There are, however, a few undercurrents that threaten to disrupt the seemingly unexceptional domestic life. For one thing, Satoru offers himself for paid sexual liaisons, takes drugs and when not at the flat often sleeps rough. The regular appearance of strangers, particularly older men, at the flat next door suggests the premises are being used as a brothel. And on the streets below, a number of women have been brutally attacked.

Parade is divided into five sections, narrated by each of the flat’s occupants in turn. This structure enables the author to examine the preoccupations of each of his characters, and to reveal the depth of communication within the group. As a non-Japanese, it is difficult to discern the distinctive voices of these individuals: their shared world of modern-day Tokyo with its distinctive foodstuffs, media and patterns of city life is so different from that of the West that those features tend to stand out and give a commonality to the whole.

Nonetheless, the four original flatmates show themselves to be thinking persons who reflect on the motivations of both themselves, and of the others. Despite the absence of much direct communication between them, all four are sensitive to the background and concerns of their flatmates. It is only Satoru who is different – as a younger newcomer with some anti-social habits his presence seems pregnant with potential harm.

One aspect which makes this an unusual ‘crime’ story is the very late stage at which salient facts about the offence is revealed. Until the final pages, potential felonies are trailed and then dissipated so that a sense of anticipation is built up, arising merely from the lack of any clear pointers, rather than any conventional exploitation of tension.

Parade is certainly a very unusual type of crime novel, a psychological thriller that presents to the reader the thought processes of a few individuals and invites an analysis of the understanding between them. It calls for a certain amount of effort, and even then the subtlety of the exercise will not be to everyone’s taste.