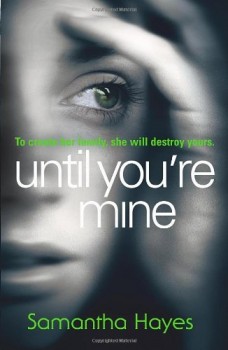 Zoe Harper appears to be the perfect live-in nanny for Claudia Morgan-Brown’s twin stepsons and soon to be born baby.  But Zoe is not what she seems.  What is she after and is it related to the nearby attacks on two pregnant girls?

Claudia Morgan-Brown has it all. She lives in a beautiful house in the leafy and affluent Birmingham suburb of Edgbaston. She is married to handsome naval officer James, stepmother to his four-year-old twin boys, Oliver and Noah, and she is eight months pregnant. She also has a full-time job as a children’s social worker, so will need extra help with the new baby, especially as James’s job takes him away for months at a time.

Enter Zoe Harper. With impeccable qualifications and wonderful references, Zoe appears to be perfect for the job of live-in nanny. It soon becomes apparent, however, that there is more to Zoe than meets the eye. There is something about her that doesn’t ring true and one day Claudia arrives home unexpectedly early and catches her in the master bedroom.

Meanwhile, not far away, two women are attacked. Both are young single mothers in the late stages of pregnancy and both have been mutilated. One was a client of Claudia’s social work team. The police have few leads but interview Claudia along with others who knew the two girls.

The three strands of the story run in parallel throughout most of the book, until the final act brings them together. The point of view switches between Claudia, Zoe and the police officers. Zoe’s and Claudia’s stories are told in the first person, allowing the reader insight into their internal thought processes and motivations. At times, it is difficult to tell at the beginning of a chapter which of them is speaking, an ambiguity exploited by the author to chilling effect.

There is a great deal of misdirection as hints to the final solution of the story are scattered along the way. They are easy to spot in retrospect, but sometimes confusing on first reading.

This story is very much about the overwhelming longing for a child that can affect some people and as such may not appeal to every reader. It is also about the lengths to which some people will go to fulfil that longing. The climax is dramatic and there is a surprising twist in the aftermath that, again, is signposted in retrospect but unexpected on first reading.

Tightly written, this is a real page turner that kept me thinking ‘just one more chapter and I’ll go and do the things I should be doing.’ Until You’re Mine is a cracking good read.